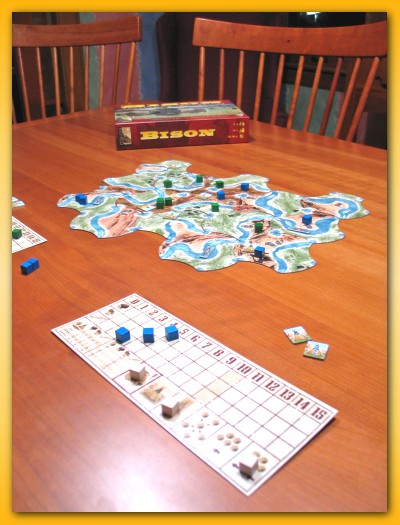 Lisa and I dusted off another game from the past and played Bison: Thunder on the Prairie. The game could just as easily have been called Turkey: Eat Me for Thanksgiving or Fish: It’s What’s for Dinner but it seems they went with the hairy cow.

I haven’t played Bison since February of 2007 so I spent about 15-20 minutes going through the rules and I think we got pretty close. It definitely plays differently with 2 than it does with 4. If I remember correctly, with 4 I spent an inordinate amount of time playing like a paranoid freak protecting all my stuff and lost big because I was ill-prepared to battle on so many fronts and with so few actions. With 2 the chaos is more manageable; the game is good but maybe too manageable. I’d definitely play again with two but I’m thinking three may be the sweet spot.

The game is relatively simple to play. Three special tiles start the game and then players grab a tile and then each take an action until everyone has taken four actions. One of the four actions must be to place the tile on the board. During this placement you get to place workers with your tile but the cost increases with the number. Each tile contains three areas (mountain, prairie, and river) and potentially animals in each region (turkey, bison, fish respectively). Other actions let you move your workers around and convert workers into tepees or canoes. Conversion brings the men back into your hand for subsequent placement on future tiles. Canoes and tepees have three values indicated by diamonds and although you start the game with some men and some low valued items, you must buy more if you want to succeed.

Each action can only be taken once in the round so you must choose wisely which actions to use and how many workers to associate with that action. The number of workers you assign to the action determines the cost of the action. All costs (action costs and buying additional items) are paid for with animals you’ve earned in previous rounds. At the end of each round (after everyone has laid one and only one tile) there is a scoring round where you evaluate the relatively influence your tepees, canoes, and workers have on each connected region and you’re granted the number of animals depicted one all of the tiles that make up the region. You mark the animals you’ve earned on the rectangular score board in front of you as well as the actions you taken in the round.

At the end, you push all of your animals down to 0 and score the final position on the board. The player with the largest sum of animals wins. 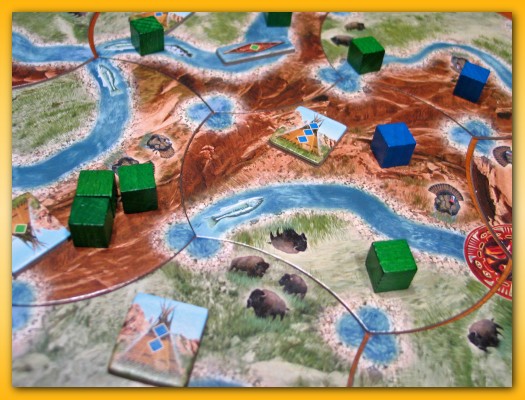 Fun little game in a relatively small box. It plays slowly with 2 as it is a rather “thinky” game. That in and of itself is okay but you may not expect such a simple little game to be that “heavy” at first. Slower players may find themselves trying to maximize every single action which can really bog things down. I’m still glad I own a copy though and would enjoy playing again in less time than 2 years from now.

2 thoughts on “Bison: Thunder on the Prairie”