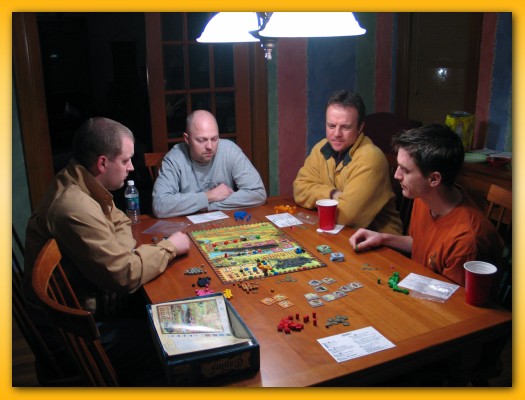 We had a full house for the Feb, 2009 installment of Analog Game Night. Before everyone showed up I opened up the dining room table so that we could accommodate a 3 player game and a 4 player game simultaneously. We didn’t buy our dining room table for gaming but it has repeatedly proven to be the the most awesome gaming table I’ve seen. In a minute or two you can double/half the size of the table without leaves. The top is double thickness and the entire top pivots towards one end of the legs and then you flip over one thickness of the top and set it down on the legs. It’s very nice because you only end up with one seam across the width of the table when open and when closed it’s a solid top.

The far end of the table worked through the 3 player sample game (8 rounds) of Galaxy Trucker while my end played a 4 player game of Dominion using the “beginner” action decks. It was my first playing of Dominion with 4 and even at that number it’s still one of my favorite games. I chose the “beginner” collection of kingdom/action cards leaving the other 15 types in the box since it’s relatively low interaction making the game a little less cut-throat. I was initially turned off by the sheer number of text-riddled cards (500) but you don’t play with all of the cards in every game and during the game, you’re faced with only a few cards at any one time limiting your possibilities keeping the game very easy to learn and to play. From the 25 kingdom card types, you pick 10 for each game giving every game a chance to be a little different.

After we finished up, Tim had to leave and Paul decided to sit out and watch the next game since he thought he’d leave a bit early. So, we closed up the table and pulled out Caylus for 5. In short, I sincerely love this game. Time simply flies when I’m playing and although the game lasted several hours, I didn’t realize it was almost 1am when we finished. For some reason, the rules to the game stick with me and I find it relatively easy to teach. I hate being ill-prepared to teach a game but it doesn’t bother me in the slightest to pull this out even if I haven’t played in months.

I thought this game night was particularly fun. I really enjoy lots of friends playing games and I hope people are having fun. Caylus was really fun, especially since a new player managed to beat me by only a couple of points on the last play of the game resolving some king’s favors from the last castle scoring. Good job Jared. I had my eyes on Jason trying to keep him from building that huge 25 building and took my eye off you! Good stuff.

Thanks for coming guys and hope to see you next month.