After making my way back from CodeMash up in Sandusky and with the weekend filled with some icy weather, I of course starting back into my gaming hobby. Well, to put it more accurately, I got back into my game-rule-reading hobby. I’m sort of like a sports aficionado that watches and follows football, basketball, or baseball but never actually plays.

This post will be a summation of some games I’ve played and read about over the last few weeks allowing me to tick off a couple in my unplayed list. 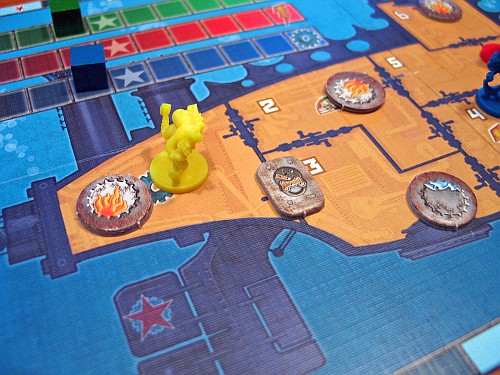 First up is Red November. Lisa, Noah, and I took our chances as a rag tag bunch of drunken gnomes trying to save the doomed sub. We actually won relatively handily but we did have some extremely lucky rolls when rooms were catching on fire. We kept rolling rooms where fire or water already existed so fire wasn’t a big problem. With little fire, we didn’t churn through the deck very quickly (using up grog and having to perform faint checks) and managed to make the Kraken a non-issue when it got shuffled into the deck.

In this cooperative game, players work together trying to move around the sub fighting issues that keep popping up (e.g. fire, lack of oxygen, flooded rooms, blocked hatches, reactor going critical, Kraken, etc.). With a Thebes-like component, players spend minutes moving and taking actions and the player in ‘last’ place on the time track is the current player. As players move forward they trigger cards to be flipped up naming the next event occurring on the sub. With more players, more bad things happen but there are more people available to fix things so it supposedly works out. However, with three it didn’t seem like it was very difficult to win. 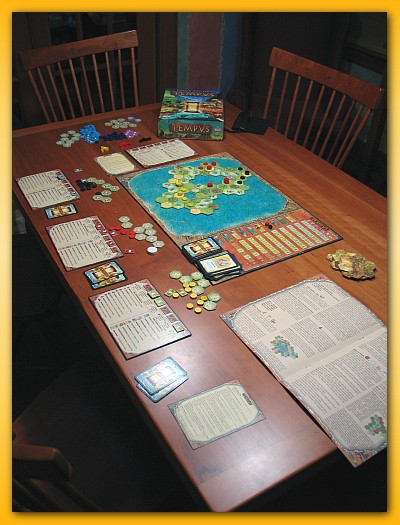 I read through the rules of Tempus and I have to put it on my short list of games to play soon. Tempus is a Martin Wallace title from 2006 but has a more Eurogame feel to it than his more recent Treefrog games. With a somewhat La Citta feel to it, players vie taking actions across numerous rounds to build cities and move their population discs on a map of various terrains. Each round decreases limits on what players can do during an action (e.g. have far discs can move on the map) and doing well in one round may allow you to advance one level beyond other players giving you an advantage. However, the end round catch up rules makes sure that you can only be one level behind the leaders.

Tempus has a modular board that makes the layout of the tiles and the arrangement of the terrain different every game. This relatively unique feature should keep the game fresh. The game encourages attacking neighboring cities so directly player interaction is encouraged although have often it occurs is yet to be determined. 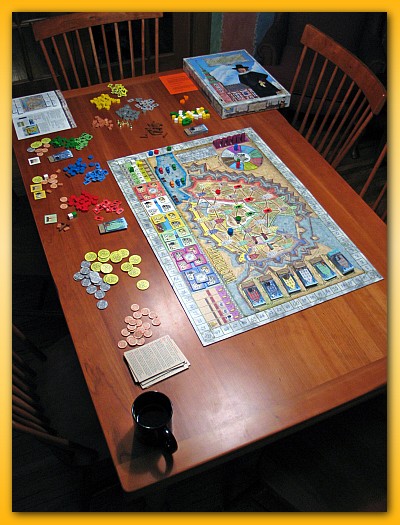 I pulled out Hamburgum this evening and whoa…no wonder this game is expensive. There are more bits than you can shake a stick at plus there’s a double-sided board. First off, the game features box art that has to be the most horrible example of game art I’ve seen. It’s horrendous. The game however is pretty darned neat. Players produce, buy, and sell goods; build ships, donate to the building of churches, and building buildings. The game has a nifty turn mechanism called “the rondel”, a circular list of options. Players move their token in a clockwise fashion around the rondel (the first three moves are free) and where they land they get to take the action depicted on the rondel.

I’m still in the middle of absorbing the rules but it seems like a pretty decent game with relatively meaty rules giving a slightly heavier feel; a thinky game. I do fear that my group may not like it due to the initial rules complexity but at 75 minutes and for 2-5 players…it’s just got to fit somewhere, right? 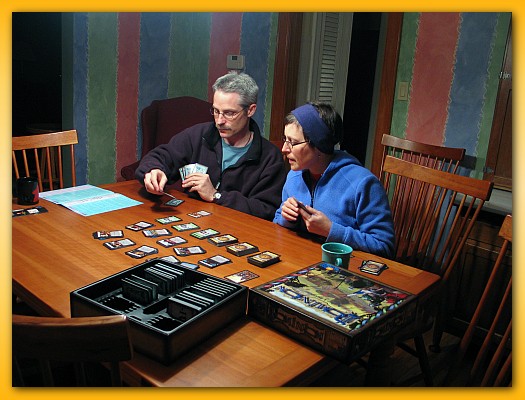 Last up is the card game Dominion. I didn’t have the game on my wishlist because I’m not usually one to like card-based games featuring cards with a lot of text on them and this game comes with 500 cards. However, Lisa got a copy for me for Christmas and after a couple of 2-player games…it’s a winner. The game is relatively simple. Game setup requires 10 types of action cards (out of the 25 types) to be placed in the middle of the table. Along with those 10 types, three denominations of money, and three denominations of victory points are added. Depending on what 10 types of cards are selected, additional cards may be used (e.g. Curse cards). Players are dealt 3 1-point victory point cards and 7 1-dollar cards for a starting hand of 10 cards representing your initial ‘deck’. Each player shuffles their 10 cards, draws 5 cards from the deck making your ‘hand’ leaving 5 cards in your ‘draw’ pile.

After a few turns you’ll start amassing more cards in your deck and when you cannot draw 5 cards, you shuffle your discard pile and finish up drawing from the draw pile. The game is pretty neat in that some action cards allow for drawing more cards into your hand, exchanging cards, getting a card for free, grant you the ability to buy more than one card, cause other people to discard cards, act as additional money during the buy phase, etc. and given which 10 action cards you select for the game can drastically alter what strategy is necessarily to succeed. The game comes with a half a dozen recommended groups giving the game a specific feel but you can just randomly choose 10 if you want. There seems to be an extreme amount of variability in each game and I’m very excited about how easy it is to teach the game. Your first game will last a bit longer but once you get the hang of it I can’t see a game lasting more than 30-45 minutes.

Having almost purposefully ignored this game, I’m pleasantly surprised and look forward to my next game.