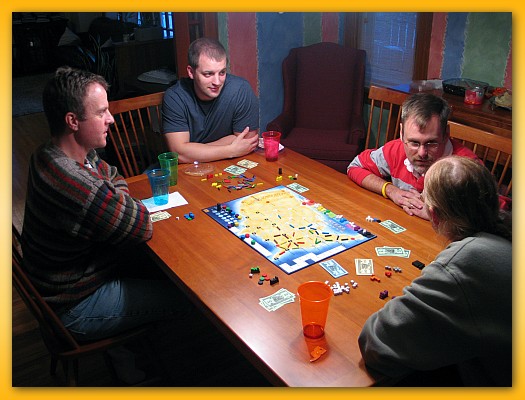 We met at my house for IGS V yesterday and managed to get in a few games. I’m always amazed at how many games you don’t get to play when you put your mind to it. Given the amount of time we had I expected to play at least four if not five heavier games but for some reason or another…we just played slowly. In any case, I had a good time and managed to play a couple of my unplayed games.

We had a new attendee, Tom, a friend of mine from several groups around the neighborhood bringing our group size to six so we dove into Steel Driver by Martin Wallace. Steel Driver is an interesting train-themed game where players bid cubes for a share in the company and control of individual trains for the round. The number of cubes winning the bid also determine what resources you have to build track in a later phase of the game. Where you build your track is important since the end game involves grabbing goods cubes from individual cities you’ve connected to and the number of sets of unique cubes drives the value of individual shares amassed during the game. 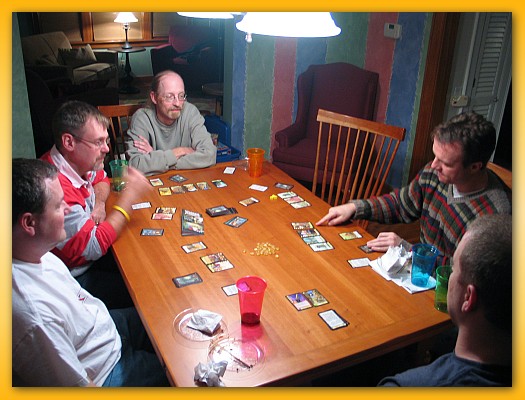 Next up was Citadels by Bruno Faidutti. New to me, the game pits players in a race to pay and lay eight cards. In a Mission: Red Planet type of mechanic, players pass a deck of role cards around the table, each taking a role granting them a special ability. Players gather gold, kill other characters for the round, steal gold, become king, swap cards, adjust turn order, etc. in the race to play the valuable eight cards. Watch out though, the Warlord role can pay to destroy some of your cards! Citadels is a fun, back-stabbing romp. 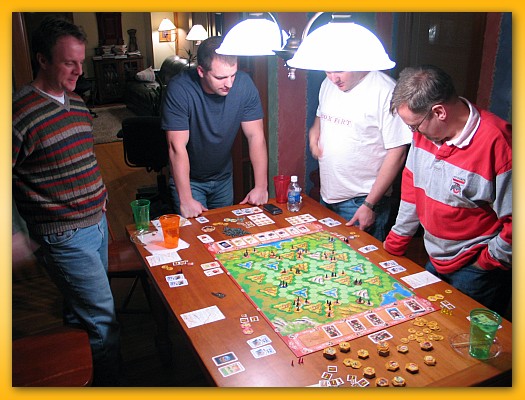 The final game, and longest…man it was a killer…was La Citta by Gerd Fenchel. Although it was long, it didn’t feel too long. I was engaged for the entire game and enjoyed every minute of it. Ken, a long time gamer in our group that has chosen to sit out for the last year or so, came back for last night’s festivities and I hope he had a good time; especially since he ended up winning La Citta and beating me by one lousy point! 🙂

La Citta is a neat game of city building but watch out. You’ve got to pay close attention to how close you build to other cities because you’ve got to contend with people moving between cities depending on what services are unveiled as important for the round. You must grow the population of your city to gain victory points but you must also build farms to feed your growing population. You’ve also got to build the appropriate city features to sustain population growth and reduction. There’s a lot going on in this game; it’s going to make a quick rise on my top 10 list of games. Now, if I can only get it to the table a few more times in short order.

Thanks everybody for coming. I always have a great time playing games with friends and just wish I could host them more often.