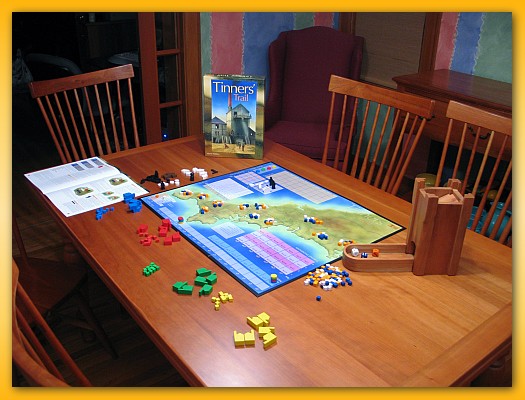 I’m not usually one to spend a lot of money on a game, let alone a game that is only a limited run. Tinners’ Trail is a new venture from WarFrog Games and designed by Martin Wallace best known for his train/rail and war games. Tinners’ Trail sets firmly in the Eurogame camp supporting 3-4 players running about 75 minutes. 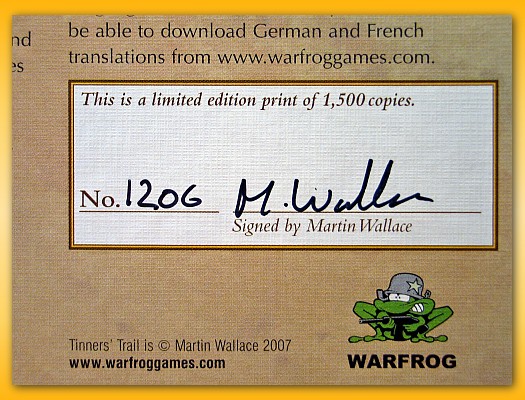 The box is signed by the designer and I secured #1206 out of the 1500 produced from the first run. It was shipped on the slow boat from England and it took about 8 weeks to arrive. Unfortunately the game box is almost an exact fit to the shipping box (no padding) and it suffered a relatively severe crush on one side. Luckily it only wrinkled the box and didn’t cause any splits or harm the contents of the box. 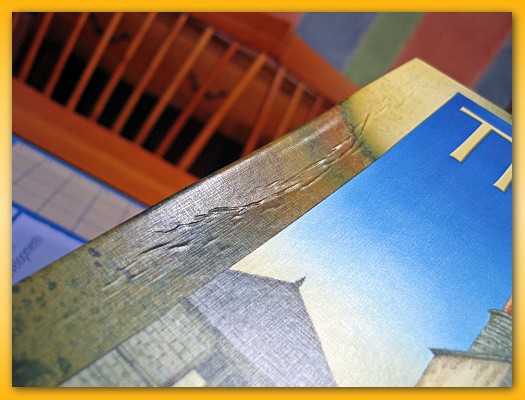 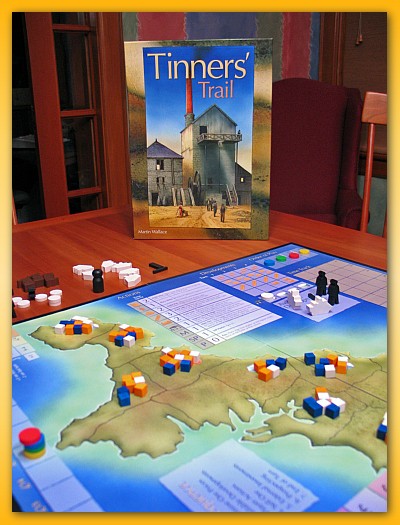 The theme of the game pits players against each other in the role of competing mining companies in Cornwall. The game lasts 4 rounds and each round comprises 7 phases:

Players attempt to build their 6 mines across Cornwall in an attempt to mine ore (tin & copper) at the lowest cost. The right to build a mine in a territory is auctioned off for cash and once built it cannot be moved. The cost to mine ore is determine by the number of water cubes in the region. The more water that exists, the higher the cost to mine. The use of water to drive cost is actually very thematic. Mines in Cornwall tended to be very wet and the deeper they dug the more water they found increasing cost.

The number of ore cubes you can mine during your turn is determined by many factors including the having a miner in the territory, if you’ve build a port (which helps bring coal to run the steam pumps – water again!), if you’ve built a railroad, or if you’ve built an adit (a horizontal tunnel into the side of the hill used to lessen the cost of draining water).

The first phase of the game sets the ore prices in the market which informs players which type of ore will be more profitable in the round. The second phase restocks an area of the board with the resources that will be available for building this round (adit, miner, port, railroad, steam pumps). The meat of the game is the action phase where players manager how best to use 10 “time points” to build resources and mine ore. Several actions cost money to build but all cost points on the “time track”. An interesting point to make is that turn order is somewhat like Thebes. The player farthest back on the time track is always the active player. With this rule, a player may take several actions before another player can react. In addition, the first player to pass will become the player that goes first in the following round.

Once all actions have been taken and the turn order has been determined for the following round, players the sell all of the ore that they’ve mined that round for its current market price. After receiving the cash, players then have the option of investing some of their money into companies outside of Cornwall. The earlier in the game you invest, the bigger payout you’ll have at the end of the game and investments drive the number of victory points you have. So invest wisely but not too much otherwise you may find yourself not being able to win auctions to build new mines where you want and not being able to pay for extracting the ore you need to ear money from the market. 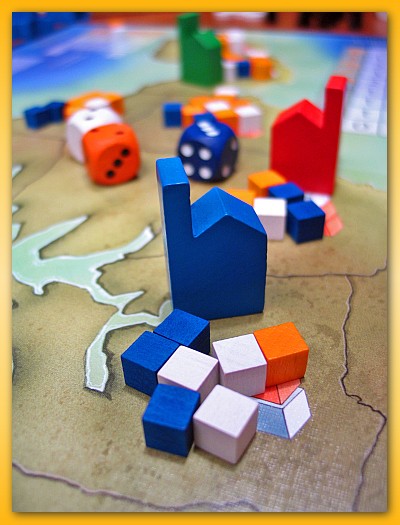 As you can probably tell I’m pretty excited about this game. The mechanics seem very clean and although relatively simple, there is a multi-step process to turn ore into money into victory points. You can feel that there is some depth there. Throw in a healthy dose of theme which really seems to mesh well with the mechanics and you’ve got a sweet game. Anybody want to come over and play right now!