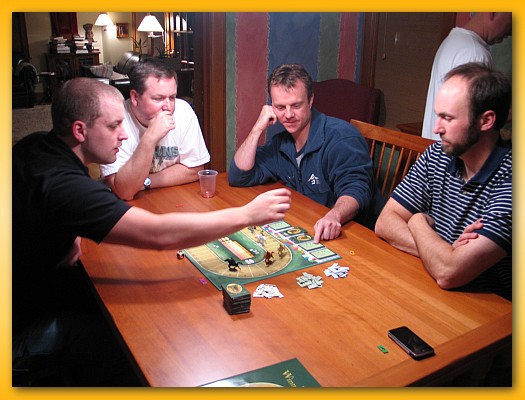 We started October’s AGN with a round of Winner’s Circle. The intent wasn’t to play an entire game but to just test the waters with a round to see what people thought of it.

Overall, I just got a “meh” sort of feeling. We played with the Royal Turf “variant” where all of the horse cards have differing “horse head” values as well as playing with the “zero” betting chip. Matching the colors of the cards to the appropriate horse was problematic and a pain in the horses ass so I may look into what others have done (if anything) to combat this. 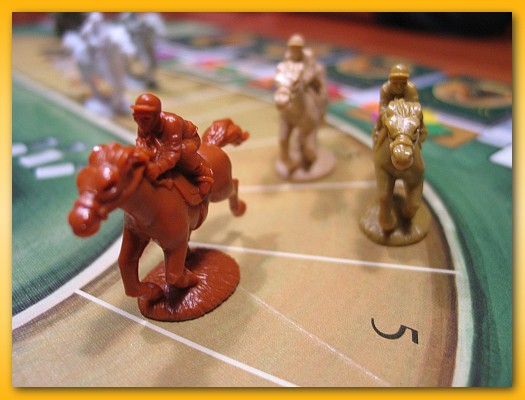 After rolling, the decision as to which horse to move seemed pretty straightforward. Which three horses made it across the finish line seemed left up to the luck of the die. I’m unclear whether much thought has to be put into which horse to bet on or is it a crap shoot.

I’m sure it’s not but I’ll definitely need more plays to raise my rating and to revive the hopes I had in the game. 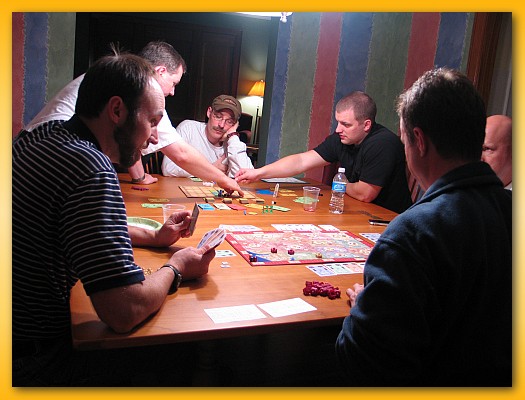 We split into two groups of three with the near end playing Taj Mahal and my end playing Santiago. I look a little bored (the guy wearing the hat) but I assure you I wasn’t. 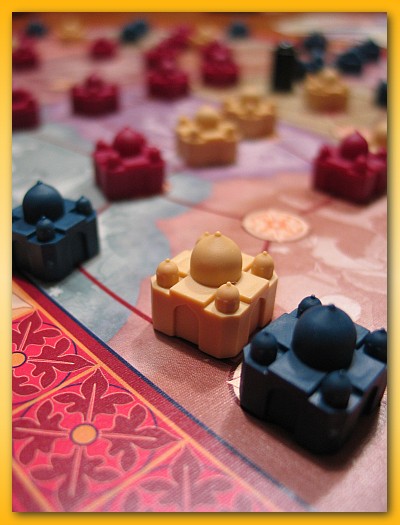 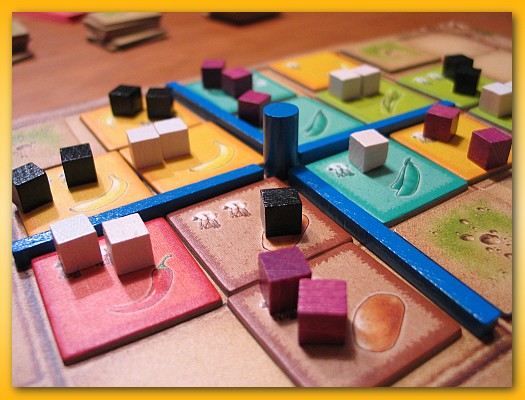 It was my first playing of Santiago and I like it. I can see real potential in the game. I know it doesn’t shine with three but it’s clear that the game is good. Especially if all players play with the same style. Analytical players that can work through the math quickly are at an advantage over those that don’t since they’ll be on top of what a bribe should be to come out ahead. However, if all players are either analytical/mathematical or “play by the gut” I think you’ve got a sweet game.

The game features an auction component for players to bid on turn order to select the plantation tile of their choice. You only get a once around the table shot at bidding so you’ve got to plan ahead. After obtaining a tile you must place it and put some cubes on the tile. Your goal is to create clumps of like colored tiles. The bigger the clump and the more cubes you have scattered on that clump, the better off you are. However, there are two very important catches. Every tile in the clump must be watered (adjacent to a blue irrigation stick) and the placement of that stick is up to the person who placed the last tile in the round. Players are allowed to bribe the player with money to place the stick in an area that’s advantageous to them. Unwatered tiles slowly atrophy (potentially over several rounds) until turning to desert creating a blighted spot in the clump.

Another important point to note is that money equals points so every time you bid you’re losing points relative to other players. In addition, every time a player accepts your bribe you’re giving that player some of your points. 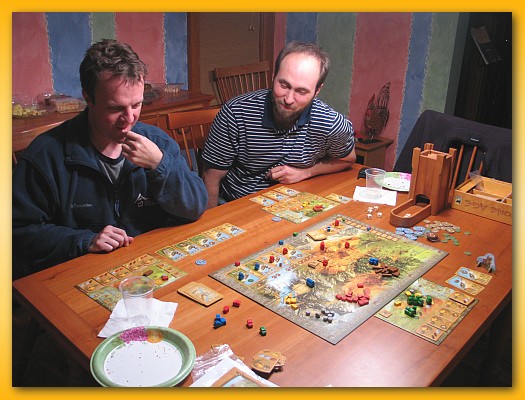 Three of us hung for the final game of Stone Age. I decided to try the “starvation strategy” without really knowing very much about how to pull it off. The starvation strategy represents an approach to playing where you ramp up your caveman counts as quickly as possible while ignoring feeding them. Although you take a 10 point hit every round if you can buy enough points every round your gains will eclipse your losses. Well, I’m happy to report that I failed miserably and came in a distant third. I suspect most of the problem was my ignorant execution but I did get burned a few times on uncharacteristically bad die rolls closing me out of buying multiple buildings in the same round. I ended up with seven buildings and a five multiplier in civ cards but that was all I could accomplish. I’m unclear if the strategy works better or worse with more players. I’ll try it again some time and report on how it goes.