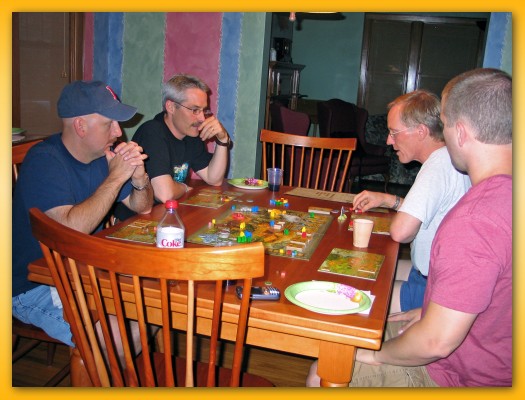 AGN Aug 2008 was held at my house tonight and with a small group of just Jason, Paul, Keith, and myself, we started off the night with Stone Age. At it’s core Stone Age is a set collection game. No wait. At it’s core, Stone Age is about maximizing resources throughout the game to push your marker down the scoring track. No wait…. Okay Stone Age present players with multiple paths to victory that include both strategic and tactical moves. Those players collecting cards are taking a more strategic long term approach and will be blessed with points at the end of the game. Those players that horde and burn resources for buildings take a more tactical approach hoping to score enough points during the game.

I like the game mostly because it’s fast paced. There is almost zero down time between doing something and each step is pretty straightforward. You can play to block but player interaction is relatively low. Stone Age does punish players that don’t stick with one or two paths to victory. If you switch gears very much in the game you’ll fall behind with no hope of catching up. The leather dice cup is pretty nifty cool but for the most part, the meeples could be yaks; the mechanics don’t reinforce the theme in any readily apparent manner. As they say on BGG, the theme is pasted on.

The game does use dice quite a bit and that may sour the milk so to speak for many more cerebral players but I quite enjoyed the randomness. I didn’t find it any more chaotic than say digging for treasure in Thebes for example.

Jason plowed ahead with a caveman explosion heading for the hut with a partner almost every chance he could get. By birthing many cavemen and by being lucky at his food rolls (and gold rolls…sheesh!) he could keep them supplied and was able to pay for many nice buildings stretching for the win. I stuck with a green card, tool, and food strategy but in the end came up short. I’m looking forward to many more plays of this game.

Since Paul had to make it a short night, we played several hands of Lexio and closed out the evening. I’ve said quite a lot about this game in the past so I won’t go into it yet again. But I do enjoy playing it. Paul said it best when he said, “There’s something inherently satisfying about playing with the big bits”. I’m not sure where he was going with that but I can’t argue with the man.

Thanks for coming guys and see you next month or earlier.