In a temporary swap for my copy of China I received a copy of The Downfall of Pompeii. A few nights ago, Noah and I played a sample game to learn the rules with each of us playing two hands of cards simulating four players. So with the rules down, I got Lisa to play with Noah and me this evening. 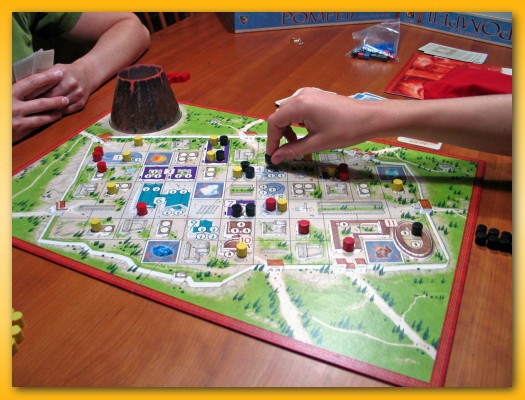 The first half of the game requires each player to populate the board with as many meeples as possible. By playing cards, players place meeple on the board using straightforward-to-understand rules that drive your decision making, granting extra meeples, and at times allowing you to throw an opponent’s meeple into the volcano where they die a horrible death. 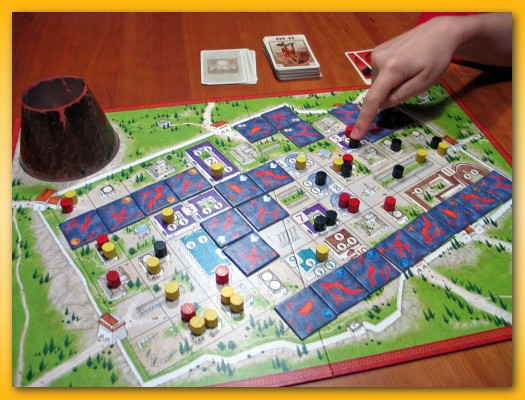 The second half of the game is played by drawing lava tiles from a bag, placing them on the board, and moving your meeples around on the board trying to march them out one of the seven city gates to safety. Lava, of course can be used to burn meeples (and throw them into the volcano) and to wall off exits effectively trapping them…becoming food for the voracious volcano. The player who saves the most of his meeples is the winner.

Pompeii is not a cerebral exercise. Your decisions, although tense, are pretty limited in the first half by what cards you possess and in the second half by the limited number of moves you can make to drive your meeples to safety. Lucky and/or unlucky draws of lava tiles can easily eliminate your chances of escape but it’s still fun to burn up your opponents, seal off the gates they’re running for, and to toss them into the burning maw. We completed our game in about 45 minutes including the rules explanation so it’s a very quick game which is nice when you’re pushed for time and/or want something light to play.

The components are well made but the plastic volcano feels like it might break after repeated bending to form the shape you see above (it fits down in a round hole through the board to keep it bent during play). I appreciate the colorful artwork that doesn’t detract from play by being overdone. I was amazed at the minute detail of the trees, horses, carriages, and people depicted on the roads leaving the city gates.

Would I purchase a copy for my library? I’m not sure. If an opportunity dropped in my lap I might pick up a copy but I don’t feel like there is a hole in my collection without it. On the other hand, it’s a nice game to use to teach an alternative style of gaming for people only used to roll and move games.