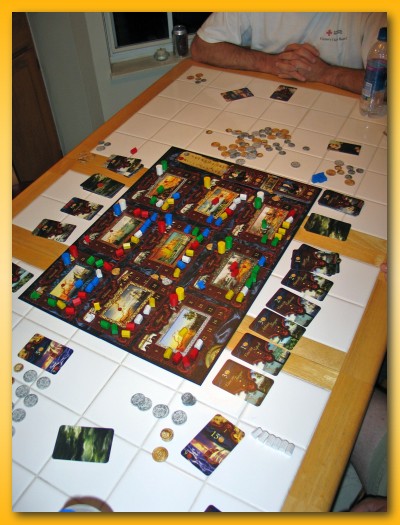 Keith hosted the July installment of Analog Game Night and Tim, Keith, Jason, Rich, and I sat down to play El Capitan. It took about 15-20 minutes for everyone to feel comfortable with the rules but we got started in pretty short order. Three hours later (!) we finished. Yes, three hours! BGG lists the game at 90 minutes and we routinely run longer than average but three hours?!

At its heart, El Capitan is an area majority game. At a high level, your trying to obtain and maintain the majority of warehouses (or second most) built in the most profitable cities while also trying to diversify in as many cities as possible. You also earn money by building fortresses in the cities. The player with the most money after the third payout wins.

The game is played across three rounds with each round comprising a minimum of 7 turns. Each turn requires that the player build or take a loan from the bank. You must do one or the other. Before you build you are allowed to buy cards, play cards (to sail from one city to another), build either a single warehouse or a single fortress, and then optionally buy more cards. If you take a loan you do nothing else on your turn (are you reading this Tim? NOTHING ELSE! 🙂 ) but sail directly to the bank and take a loan card and the money the loan grants you.

Each player gets a fixed number of bits (6 warehouses and 1 fortress) per round and the round is over when one player builds all of their bits. You get another batch of bits for the next round and if you didn’t build all of your items in the last round, you have more to use in the current round. During the first turn everyone is going to have to go to the bank. You just aren’t given enough starting money to build everything. At the end of the first round, a payout occurs and hopefully you get enough money to pay off your loan(s). If you don’t you have to extend your loan(s) and pay it/them off at the end of the next round.

The game started slowly but that’s understandable since it was our “learning” game. However, it remained slow throughout much of the game. We routinely struggle with analysis paralysis and we did experience a bit of over analysis as well as just being unprepared to take a turn. However, I’m convinced a leading factor for slow play was the artwork. Mike Doyle has some awesome skills when it comes to box art. The quality is top notch. But in El Capitan, the artwork has some real downsides:

Strangely though, I have to say I did like the game and look forward to more plays but maybe 5 is just too many. Or maybe the game only shines with 5 if you play with some of the included expansions (more city boards). We also thought it might speed up the game if we had a couple of sand timers and for every turn you don’t accomplish in an allotted amount of time, you have to pay some money to get an extension. So in summary, good game, somewhat slow, frustrating yet lavish art, want to play more, nice mechanics, lots of choices to make.

Edit: I found this image on BGG that allows for comparison of the artwork for the original form of the game: