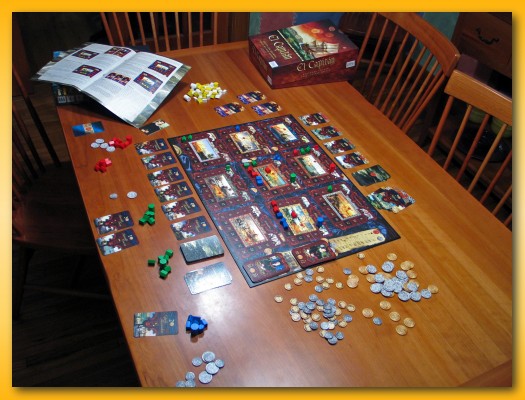 I pulled out El Capitan this weekend and started going through the rules…playing some sample turns. El Capitan is a rework of a game called Tycoon. As I understand it, Tycoon came out on the heels of El Grande and due to El Grande’s success, Tycoon was largely overlooked. Wolfgang Kramer was involved with both designs.

El Capitan has been rethemed, and with some new rules and artwork by Mike Doyle the game got a fresh start. This area control game requires the players to sail their ships from one harbor to another across three rounds building warehouses and fortresses. Three payouts occur during the game where players receive money for the most warehouses in a particular city, for fortresses, and for diversifying in as many cities as possible.

There are some interesting twists when warehouses get closed when new warehouses get built and how the payouts in each city change over time. The ability for players to sail from one harbor to the next is also limited by what cards are available. On your turn you optionally sail (unless forced to) and then build a warehouse or a fortress. If you don’t have enough money to purchase a ticket to the harbor you desire or build a structure, then you are forced to go to the bank and take out a loan.

Money seems like it will be very tight in the game and players will need to watch out that they don’t overspend their ability to payback the loans the take from the bank. I’m hoping to get it to the table soon and I’ll have more to say on it after I get a play under my belt. 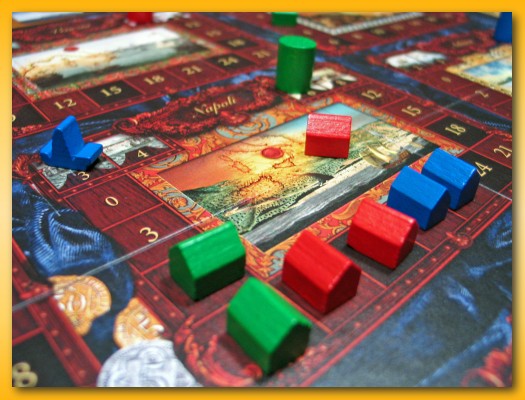