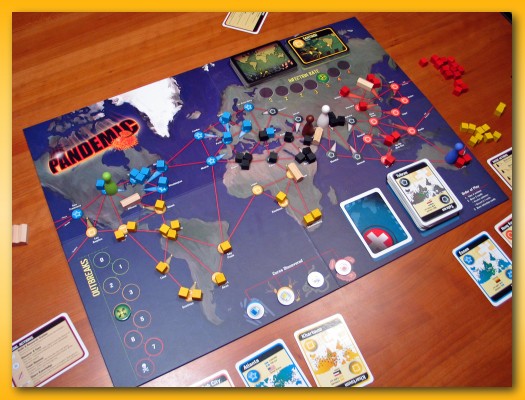 At IGS III I got my first opportunity to play Pandemic. Bob, a gaming buddy of mine whose copy we played, is a relatively new gamer with the buying bug and he allowed a temporary swap of my copy of Mexica for his copy of Pandemic.

If you’re familiar with the game, you can jump forward a few paragraphs. However, if you’re not familiar with the game, the game is probably different than most games you’ve played in the past. It’s cooperative. By that, I mean that rather than there being one winner and the rest losers, all players either win or all players lose. As a group, you cooperate to try to beat the game. You take individual moves but you coordinate your moves to make it easier to accomplish group goals. Think of it like ganging up on the leader. However, in this case, it’s the game you’re ganging up on and not a human so there are no hard feelings.

Pandemic has a rather morbid theme but one that fits nicely with the cooperative style of gaming. The game represents disease, sickness, flu, and plague and its desire to sweep across the globe from one city to the next infecting as it goes. The impact of the disease escaping the boundaries of a city in an outbreak can trigger unchecked growth much like a real world pandemics. Your goal as scientist, researcher, etc. is to work together to find cures and to eradicate the diseases before they run wild. There are only so many turns to do that and if you don’t find the cures before time runs out…you all lose and the game wins. Who wouldn’t want to work together against pestilence and death?!

I’ll not go into the rules as they are readily available on BGG for those that want to find them but suffice it to say that I’m hooked on the game. I don’t have a cooperative game in my collection and having played War of the Ring and Shadows Over Camelot I want Pandemic on my shelf. WotR and Shadows are dripping in theme but have a more geeky/fantasy/role-player theme that won’t appeal as much to 1) my wife and 2) the crowd of non-gamers that I think would enjoy the cooperative style. I believe many non-gamers shy away from games because they suspect that they’ll appear inadequate or don’t want to look silly during a cerebral ‘event’. However, with cooperative play (and especially with a non-fantasy theme) they can participate with fellow players (not against) in a game that doesn’t feel like they’re turning into a 42 year, goth, geek that still lives in the basement at his parent’s house.

The first time we played, the four of us played the medium difficulty version and lost…but just barely. However, we were playing with incorrect rules which made the game more cruel namely:

So, my first game although fun and gave me a good feeling for the game, it was almost a complete disaster in terms of playing correctly. So, Lisa and I pulled it out and played the easy difficulty version for two players. Correcting our failures from the first play (I’d since read the rules myself catching our errors) we managed to cure all of the diseases and win without a single outbreak in the game. I’m sure that doesn’t happen often but it also wasn’t easy. We only managed to win on the third to last turn and, after reading some BGG forum postings I found that we’d also played a rule incorrectly namely: 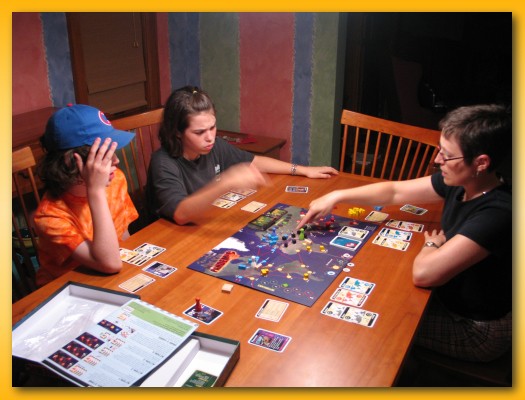 I felt pretty good about the second game and tonight Lisa gathered Sophie and Noah and told me she wanted to play again as a family. This time the Medic was not in play and as luck would have it I got to play as the role I hadn’t seen in action yet: the Dispatcher. Of course we played a couple of turns incorrectly when I not only moved Sophie’s pawn (using the Dispatcher’s special ability) but I also removed cubes in the cities where her pawn was. Sensing something amiss, I ran to BGG and found the error buried in a forum posting and we played the rest of the game correctly (I think). Again, we played the easy form of the game but were only able to win on the very last turn of the game. As the next to last player I was able to dispatch Noah to Sophie (the Researcher) who was also in a research station. Then on Noah’s turn he was able to get two black cards from Sophie that matched the two he already had and since he was both the scientist and at a research station he was able to cure the final disease for the win. Awesome timing given that there were only two cards left in the draw pile.

So, do I like Pandemic? Yes! Would I recommend it for non-gamers, families, and kids? With enthusiasm! The theme, although odd at first blush, is not gruesome. The artwork is not gross. There are no depictions or plague-ridden corpses or anything. The theme, in fact, enhances the play because it represents a real world foe. I believe the cooperative play joined with the realistically themed common enemy actually enhances the appeal of the game making it a great opportunity to open up the gaming experience to those around you that might not necessarily be inclined to play. Lisa did mention that she might like it better if the map was a non-real world map and the cities were not recognizable but, in my opinion, that aspect enhances the game somewhat by keeping the theme grounded in the real world. For new and/or non-gamers finding Sydney on the map in order to infect it with a disease will seem more normal than trying to infect, for example, Rivendish on the planet Under Earth. I am, however, not all that fond of the artwork and would like a larger board. Sometimes it’s hard to manage so many cubes in a tight area with lots of cubes and research station. Also…they left of New Zealand which is just wrong.

Pandemic is relatively difficult to find at the moment but more copies are expected some time this month in most online stores. However, after exchanging a few emails I was able to capture a ding and dent copy from Game Surplus that should ship in the next day or so. I’m willing to tolerate a scuffed box to pick up a copy for only $19. If you’re looking for a different gaming experience where the entire family can cooperate and learn to work together to solve a complex problem while having fun, then look no further. Pandemic is the game for you.