We met Monday night at Keith’s house for the May 2008 installment of AGN. Thanks for hosting Keith.

We only had four so I was really wanting to break open my copy of the card/trick-taking game Tichu. I’ve owned this game for years and could never quite get it to the table. I’ve tried numerous times with my family with no success and they’re even euchre players!

The game is best played with four playing across the table from your partner. You can play in the same type of setting at euchre and talk over the game play which I appreciate for casual non-gamer friends and family.

We only played four hands to get a feel for the game but I think I made some converts. If you haven’t tried Tichu…grab a copy. You won’t regret it. 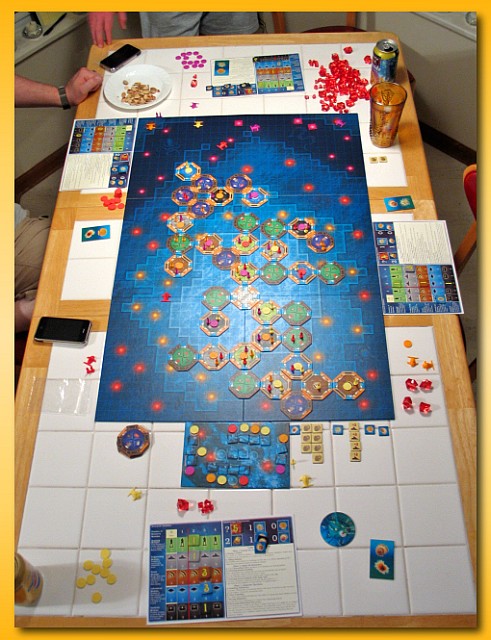 The rest of the evening was taken up by Nautilus, the submarine/exploration game I’ve blogged about in the past. It only gets a 6.55 average rating on BGG which is respectable but, for me, it rates higher. I really enjoy the mechanics of buying and placing the research and habitation modules, moving researchers, activating modules, and building up your activation chart enabling you to be more effective in subsequent rounds.

The game does exhibit a fair amount of luck since the position of the good treasures is not known and it takes submarine exploration to recover them. However, the use of your sonar can help mitigate that. In any case, I enjoyed myself as did Rich and Keith. I’m not sure Jason liked it all that much. He tends to not be fond of luck-based games. Or maybe it was the down time between turns which can be large at times.

Note: I replaced the paper money with two sizes of plastic ‘Rubium’ nuggets I bought for my copies of Nexus Ops. Paper money is a pet peeve of mine. I can’t stand the stuff.