In between shoveling the driveway five times trying to stay ahead of the foot of snow that fell last night and today, Lisa and I broke out Nautilus, a game I recently picked up in a BGG trade. The kids walked down the block to a neighbor’s house to play in the snow so we figured we had a few hours to kill (re)learning the game.

I’d read through the rules before hand but we still took a leisurely stroll through the setup, drinking tea and chatting about the snow. About the time we were ready, the kids and our friends showed up so we broke for more tea, scones, and some popcorn. Getting back to the gaming in a few hours, we drove straight through to the end with Lisa pulling out the win by 4 points! She played very well.

Nautilus is an enjoyable game with a relatively strong theme. It is however, a little on the long side for what it gives back. The game is not an economic engine style of game where you need to build/consume/produce/sell items driving victory points and/or money and for that I’m actually grateful. I already own several games of this nature so its lack of it compliments my personal library very well.

Nautilus is a game of exploration. You begin the game with the bulk of the money you’ll have for the entire game. There are two ways to earn money during the game but in general your supply trends towards zero (or close to it) at game end. Your turn comprises three phases 1) buying and placing manned habitation and unmanned research modules on the sea floor, 2) moving researchers around the network of connected modules and activating research modules, and 3) launching and driving subs from an activated research module out into the ocean in search of treasure. Activating one of the five module types with a researcher grants you the ability to move up chits on a ‘scoring’ chart that grant not only more powerful abilities but the potential to score higher at game end. The activated research module types determine how far you can move your researchers within the station, how far your submarine can move, the effectiveness of your sub’s sonar, how many hidden treasure chips you can peek at when you uncover an Atlantis treasure, and how much money you’ll receive when you uncover a treasure chest.

There are also various forms of other treasure that when collected by your sub, affect your score. All of these treasures come together to form an overall score and it’s this score that is multiplied by a score you receive for the number of activated research modules. This final product plus the money you have left at game end represent your score. 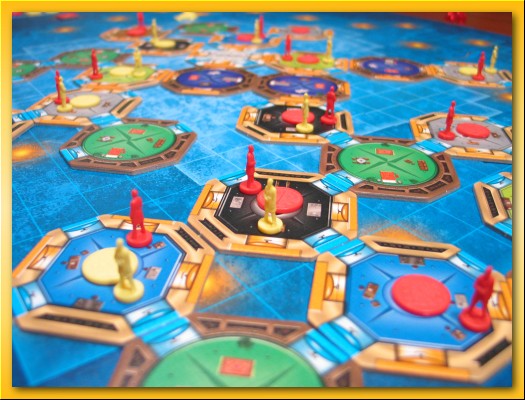 The game does lends itself to analysis paralysis in that players may take a long time over analyzing their move. Other players can use this time to plan to some degree but your options may change dramatically based on another players move. Money management is very tight throughout the entire game and players will strive to minimize cost. To do that, one needs to determine when to place modules, how many researchers to deploy with your habitation modules, and where and how often to dig for treasure. Although the game is relatively complex and of a different style than she’s accustomed to, Lisa and I had a good time and I look forward to many more plays. Lisa commented that she’d need to play it several more times before she could begin to feel comfortable evaluating a good move from bad and how the finer details of that move can affect future options. The final scoring had her stumped and she was truly amazed that she pulled out the win. It really came down to my spending a few extra bucks to protect a lead in the sonar module that proved unnecessary. Had I instead, gone for dominance in another type of research module I probably could have pulled out the win.

I’ve not played this game since April of 2006 at a CABS session that drug on until about 4:30am. It was the memory of that single play that triggered my desire to perform the trade in the first place. I’m happy with it and look forward to introducing it to my normal game group.As a side note, Nautilus comes with paper money in two denominations. Having extra “Rubium” from a money replacement in Nexus Ops, I used some of that to give the game a better tactile feel than the paper even if it is somewhat out of context. Maybe the gems represent goods found from previous expeditions.