I hosted the March 2008 installment of Analog Game Night at my house. Like last month we had six players and again I (we?) felt it a difficult number to deal with. I share the role of undesignated “rule knower” with one other gamer and I plan ahead for most game nights by tracking the number of confirmed attendees and organizing a list of candidate games for that target number. The night before I try to scan the rules of the list of games for several reasons:

So, on Sunday night while perusing my game cabinet, Lisa started chuckling and asked me why I work so hard at planning when I know it’s not going to work out anything like I’d expected or hoped. Of course she’s right…she always is. So I resigned myself to just wing it and not feel responsible for the happiness of the group and to remove some stress from my gaming experience. Just go with the flow so to speak.

So Monday night arrived, and five people stood in my dining room with expectant eyes. We all stared at each other for a bit before two people said they had only enough time to play one meaty game due to starting a new job the next day and having to open up the church for Ohio’s primary voters the following morning. So, I recommended splitting into two groups to shorten the playing time for those that needed to leave and to allow for the opportunity to play one of my 3-4 player games. The other group decided to play Union Pacific since, as a group, they were the most familiar with that rule set. My group, on the other hand got to do something I’ve been hoping for for weeks…years…yes…Tigris and Euphrates. 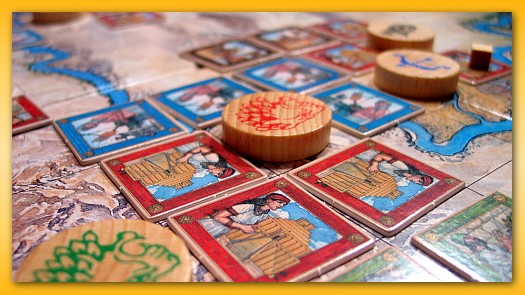 But wouldn’t you know it, I was ill prepared to teach it well and it had been awhile since I’d played (almost exactly two years!). So, after stumbling through the rules we finally got started and in the end I think we did okay. This time, I remember no rule infractions and having now only found the reference to my previous play (fiasco?), it’s difficult to not have done better. In any event, I would love to establish T&E as a more regular game for game night. Similar to Caylus, there’s just so much going that it feels like there are always positive options and many, many paths to victory. Although I’ve only played a few times, T&E could easily be my favorite game. 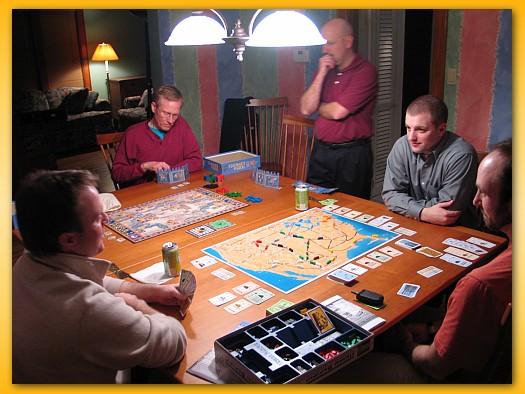 The Union Pacific group finished slightly ahead of our game due to a game ending double dividend situation with many cards left in the deck. After boxing up the two games and saying our goodbyes to the early nighters, we dropped down to four and I pulled out Arkadia. 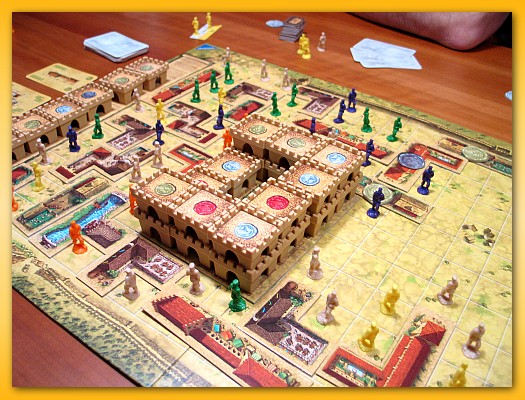 Lisa and I enjoy Arkadia as a two player game but I have played it at a game night in the past with four. However, this time, the three other players were new to it.

It started off a little clunky; probably my “winging it” approach affecting my delivery…oh why do I listen to my wife! There was a fair amount of confusion over when you can use your architecture banners, when you are allowed to evaluate your holdings, what cards are useful on the draw, and how many people to place seemed a crap shoot to everyone. However, as the game progressed I think it started to grow on them and by the end they’d gathered some more respect for it and its subtle features. I like the game with two and with four, although different and more difficult to score big, it’s still a very enjoyable experience. We tend to play without the screens to take away the memory/tracking aspects of the game which seem to just increase mental work without increasing fun. 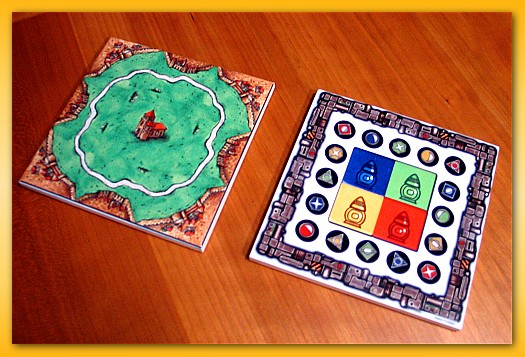 Keith, purchased a couple of coasters from The Board Game Gift Shop so I thought I’d share some close ups to give you all a chance to see the kind of quality you can expect. 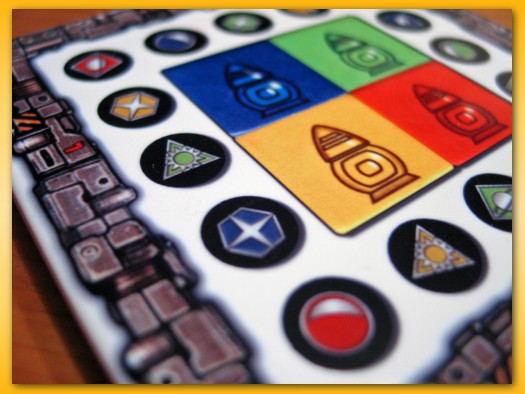 Not to get overly promotional but I was wearing an Amun-Re shirt from the store as well. 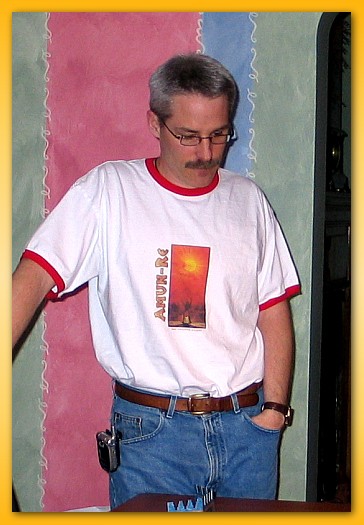