I finally broke down and ordered a copy of Railroad Tycoon and a copy of Formula Motor Racing (FMR) from Game Surplus. 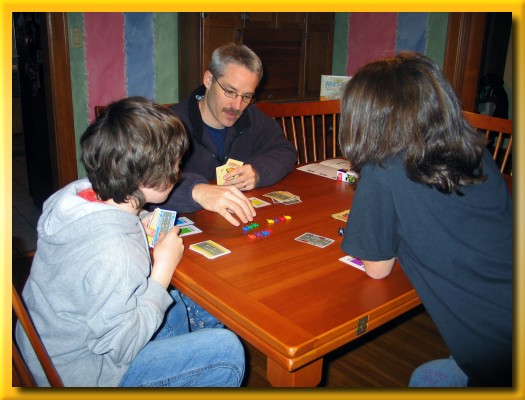 FMR is a light, quick, filler designed by Reiner Knizia known more for his more heady, lightly themed, simple yet elegant designs. FMR feels like something he would have designed in five minutes while taking his morning shower. The game supports up to six players so it’s a great opener or closer. It consists of six pairs of cars in six colors, a deck of cards, and a 12d. All twelve cars are played regardless of the number of players. In the game above, each player was playing two different pairs of cars. The cars are always kept in a line on the table and players play cards which adjusts the order of the cars in the line and then draw a card. The goal is to be have your cars in one or more of the top six spots garnering points at game end. An official game lasts multiple sub-games determined before play begins. The cards consist of actions that advance a pair of cars, cause crashes, loss of position, etc.

The game has great moments of Schadenfreude when players suffer the consequences of well timed card play. The kids seemed to relish the ‘oh yeah…well take that’ aspect of the game and after a quick round we set up for round two after a resounding “lets play again!”.

I don’t have much to say about Railroad Tycoon yet. I opened the huge box, punched the bits, and set up the board to just see how big the thing really is. 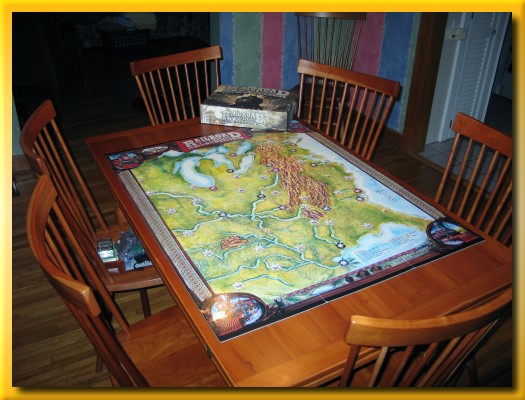 In the image above, the board has been placed on my dining room table and as you can see, the board is large enough that playing the game would be difficult with such a small amount of edge space. 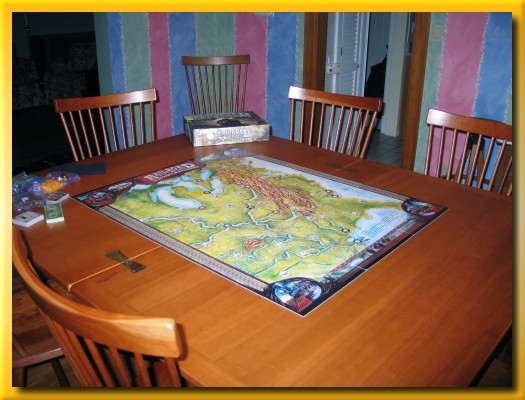 However, the neat thing about this table is that the entire top pivots towards one end of the legs and then the double thickness top opens up using hinges along the long edge (now in the center of the table). In its open state, the playing area is effectively doubled making a great space for playing this game. I’m really looking forward to tearing into this one.