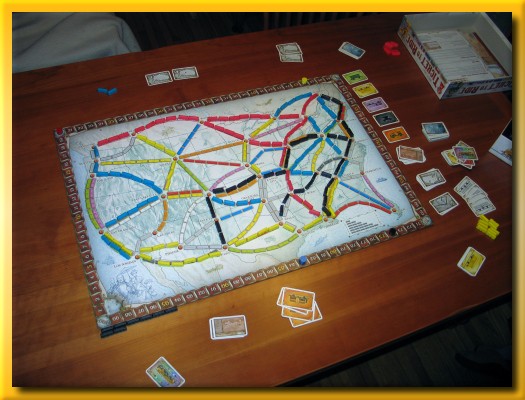 Lisa cajoled the kids into picking a family game this evening and we ended up with Ticket to Ride. There seemed to be a fair amount of grumbling from everyone early on about the initial two route tickets but we gritted our teeth and got to work. Lisa (yellow), Sophie (black), and I (red) were crowded in the east while Noah (blue) was initially free to roam in the west. As the game progressed, Lisa grabbed more routes and expanded westward while I had to settle for struggling for a newly obtained twenty point route across the northern border. Sophie ended up grabbing another almost completely overlapping route and Noah was struggling to weave his way through the tangle in New England to meet his initial two routes.

In the end, Noah plopped down a four train route ending the game with only two remaining trains denying Lisa a chance to get a final white to connect her north west route with her southern route.

Ticket to Ride is a great family game and a great gateway to many of the more complex games I play on a regular basis. I’ve played TtR many, many times and grab for it when introducing alternative games for non-gamers or when wanting to play something relaxing & comfortable. If you’ve not given it a shot, take a chance on it and introduce your family to something new.