I have several games on my shelf that I enjoy but rarely play and I organized an impromptu game night with the explicit goal of playing some of them. In my normal game group, we routinely stack up games and go through the process of deciding what game we’ll play given the number of people we have. We’ve had many discussions about splitting into two tables when we have six or more or trying to find something that we can play as a single group. We’re not overly organized and in general we try to stick together in a single game if possible. We routinely have at least five so many of my really great four-player games languish on the shelf.

My goal was to get three or four players together and play as many games as possible on the following list: Reef Encounter, Tigris & Euphrates, Amun-Re, Notre Dame, and Caylus. Okay, so the last three can be played by five players but I also don’t get to play those games much and they’d still play well with three or four players. To get a quorum I invited six people since in the past impromptu gaming has a fairly low turnout. However, wouldn’t you know it that five of the six came so with me we had six.

Initially I was bummed somewhat since my plan was really to play Reef Encounter and/or T&E and then anything else was icing on the cake. But, I decided to give up the fixed goal and just relish in the opportunity to play games with some great people regardless of what we played. 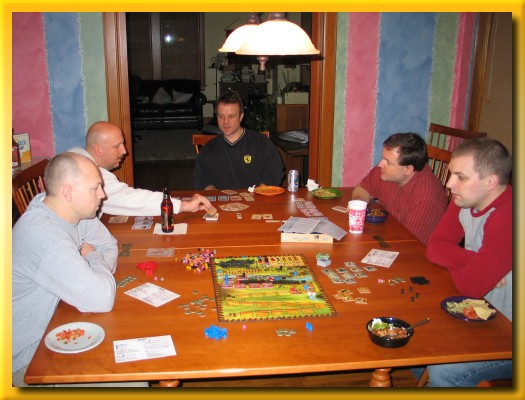 Initially we split up into two groups so I opened up the dining room table (effectively doubling the playing area) and on my end, I set up a three player game of Caylus with two new players. At the opposite end, the other three set up San Juan since two had played it before and the third was interested in learning. Caylus is a rather time consuming game to teach to new players (one of which is a relatively new gamer although he does pick up rules quickly). The lawyer wasn’t coming out so I rushed both the bailiff and the bottom king’s favor to grab the additional buildings after batching. I’d never participated in a a game that played out in that fashion and had a great time stretching some new muscles. Both Jason and Brian seemed to enjoy the game a lot and I’m sure they’d play again if asked. 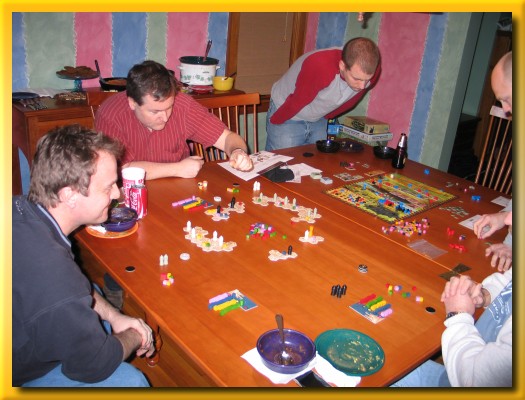 Before we could finish Caylus, San Juan ended and the far end of the table set up my copy of Carolus Magnus. CM is the leading candidate for my favorite three player game. I love the dual nature of the bidding chips that not only determine turn order but also determine the distance the king can move. Add the tension of placing paladins in your court or on the territories and you’ve got a great recipe for fun. 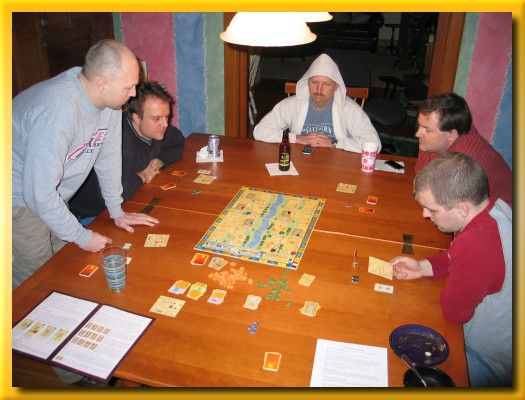 Carolus Magnus and Caylus finished at roughly the same time and Keith decided to sit out and browse the web on his iPhone. With five, we set up Amun-Re and after running through the rules to the four new players, we got started. The first round was rather uneventful but by the end of the old kingdom I think everyone was moderately interested. It had been a long time since I’d played and I have to say, I was somewhat disappointed in the game. My previous plays had been fun but this time I was finding it much more fiddly than I remembered. Juggling the power cards and the money cards, making change, buying and placing farmers, swapping bricks for pyramids, making sure people got their free stuff from the provinces they’d won during the auction phase, etc. It just felt tedious. We played out the game but I must say that we did discuss only playing the first kingdom. In general, everyone felt the game was okay but it just didn’t light any fires in anyone.

I had a great time and I hope everyone who participated had a great time too. Thanks for coming. Since I didn’t get to play Reef Encounter or Tigris & Euphrates, I guess I’ll have to just organize another impromptu event to get that accomplished. Sorry we keep our house colder than most of you are accustomed to. The added benefit of the programmable thermostat dropping the temperature after 10pm didn’t help. We routinely wear sweatshirts in the house. Heck, Lisa wears a headband most nights. And no Rich…the dining room never gets colder than the refrigerator 🙂