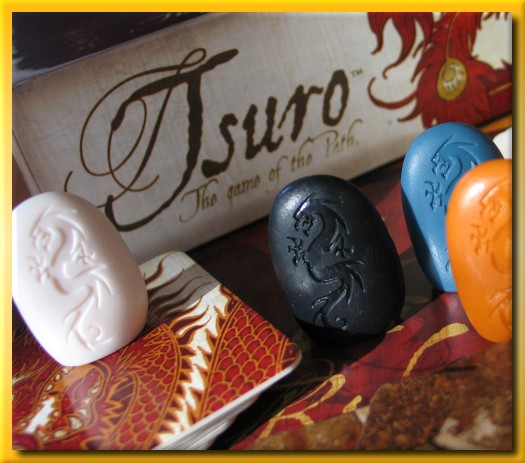 71 unique tiles are shuffled and each player receives three. A single tile depicting a dragon is set aside for later in the game. Play begins when the starting player places one of her three tiles ‘in front of’ her token. After placing the tile, all tokens that can follow the path across the new tile must do so and follow the path until reaching the edge of a tile or the edge of the board. A user’s turn ends by drawing a new tile to replace the tile played. 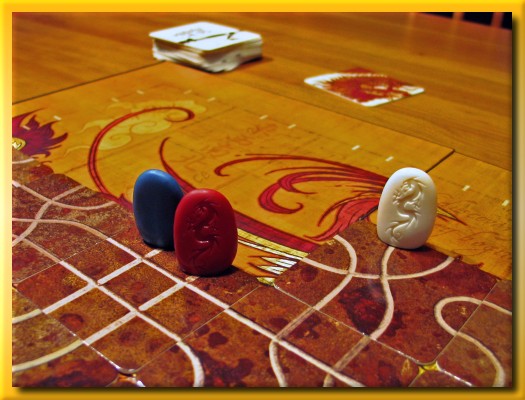 The goal is to be the last player with your token remaining on the board. You are immediately eliminated from the game if at any point a tile forces your token to follow a path off the edge of the board. The player forcing the tokens from the board is then free to swap any number of his tiles with the tiles the eliminated players have. After the swap, remaining tiles are shuffled and placed under the draw pile.

If at any point the draw pile is exhausted, the first player requiring a tile takes the dragon tile instead and play continues with less than three tiles. Then, when a player is eliminated and more tiles become available, the player with the dragon tile returns it to the edge of the board and draws one of the new tiles. Continuing clockwise, players draw replacement tiles until the draw pile is exhausted or all players have restocked to three. As done previously, the first player that cannot fully replenish their hand of three tiles, takes the dragon tile.

You must place the tile in front of your token which means your token must move on your turn. By placing a tile next to your token and another token you can force another player’s token to move in addition to yours. All tokens must move to the end of the path after every tile is placed.

Players are not allowed to ‘commit suicide’ unless forced to do so. Players are eliminated whenever their token follows the path to edge of the board or crashes head-on into another player’s token.

If the final tile eliminates all remaining players, the game ends in a tie.

Tsuro’s artwork and theme are awesome. The color scheme is rich. The artwork is carried through to every facet of the game from the trifold rules to the tile backs, from the unpopulated board to the tile fronts, from the box art to the paper dust liner in the box. 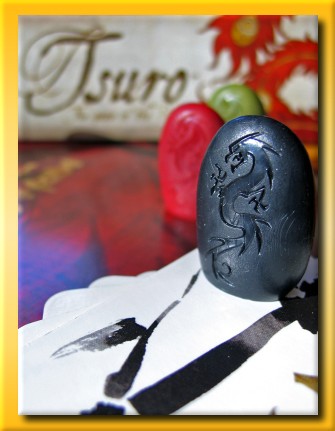 In general the components are well made. The tiles, although a little thin seem to hold up nicely, don’t seem to warp easily, and are relatively easy to pick up when placed flat on the table. The tokens are plastic resin based and include a dragon stamp. Plexiglas tokens (like Samurai) would have been very nice though. The box is somewhat thin and I can already feel some compression just inside the edges. The dragon tile artwork appears somewhat blurry. I’m unsure if this was an error during manufacturing or purposeful.

Tsuro’s rules are straightforward with the exception of the explanation of the dragon tile. The rules present a convoluted litany of descriptions of where to place the dragon tile in various circumstances that lead to confusion. The mechanism by which players would have less than three tiles is far from clear. I had to peruse BGG to understand that the dragon tile should just be set to the side and used as an IOU for the first player that needs tiles.

Tsuro is at best a chaotic filler. This Metro-like game somewhat plays itself in that players have few major decisions to make. Play is very tactical. When tokens are distant from one another play is uninteresting. When tokens are in close proximity, play is unpredictable. I cannot imagine the game with all eight opponents. With three players the game only lasted about 15 minutes so being eliminated early through no fault of your own isn’t too much of a concern.

The artwork is so well done I really wanted to like the game. Unfortunately I just couldn’t find the game in there anywhere. 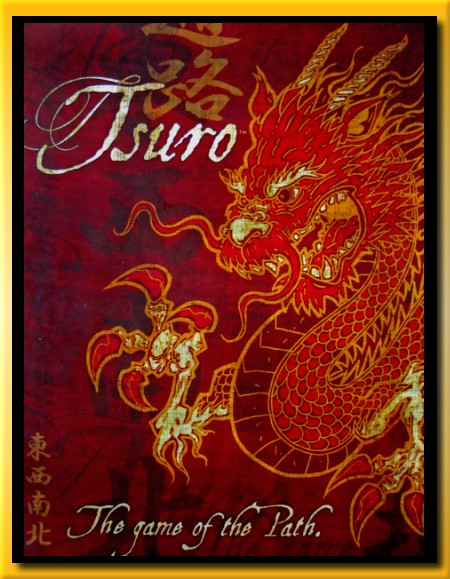