This morning, my mission was to coerce several coworkers into playing Taluva with me after lunch. Successful in my mission, the three of us ate a quick bite and I made quick work of explaining the rules.

The game is deceptively simple. Each turn, you draw and place one of the small but extremely thick tiles (a connected set of three small hexes depicting an erupting volcano and two, potentially identical, terrain types (water, stone, sand, jungle, or grass) followed by building one or more of your wooden bits (hut, temple, or tower) in any valid location on the land mass (not limited to the tile you just placed). Your goal is to build all of two of the three kinds of bits before the tiles run out. If that does not occur, the winner is the player who has built the most temples. Ties are broken by the most towers and then huts that have been built.

Tile placement is governed by a few simple rules. Firstly, you are always allowed to place the tile directly on the table (level 1) and abutting the rest of the tiles so that at least one side touches the rest of the land mass. Secondly you can also place tiles on top of the land mass (levels 2, 3, etc.) as long as the volcano on your tile overlaps a volcano on the tile below it and the tile doesn’t align exactly with the tile below it. The number of volcanoes covered is irrelevant. You’re also allowed to crush other players huts (removing them from the board) as long as you do not completely destroy the entire settlement (a group of adjacent huts, towers, and temples).

A single hut can be built on level one anywhere on the land mass or a player can also expand an existing settlement. Settlement expansion requires the player to choose a terrain type (e.g. jungle) and then locate all of the unoccupied matching types directly adjacent to the entire settle boundary. For each unoccupied and matching hex, the player places the number of huts equal to the level of the hex. You are required to build every turn and if you cannot…you lose. 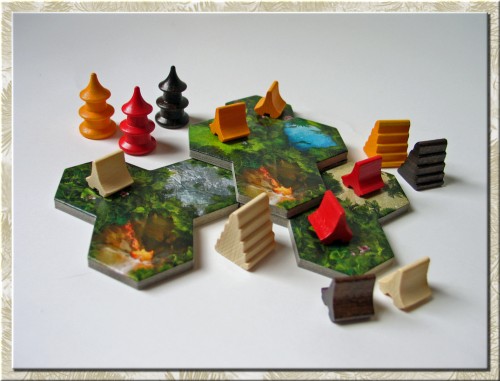 That’s it in a nutshell. The game is an extremely tactical spatial exercise. The three dimensionality of building up without granting opponents clear opportunities is a clever twist of mechanics. The game hinges on determining how and when it is the best time to squash your opponents settlements and how best to set up your own settlement placements to make every move count. Those players that can make individual moves benefit multiple settlements while hindering others will come away winners. The randomness of the drawn tile does, at times, determine the winner. I’ve played several games when drawing a tile with a particular terrain type would have granted me a win. However, the luck aspects don’t overwhelm the game in my opinion.

My lunch group played well and I was almost taken by surprise by the player to my left on an expansion move that amazingly left him with only one hut and his original two towers. The player to my right needed only another turn or two to win but I managed to pull out the win with only three or four tiles remaining.

I really enjoy Taluva. It’s one of my favorites.