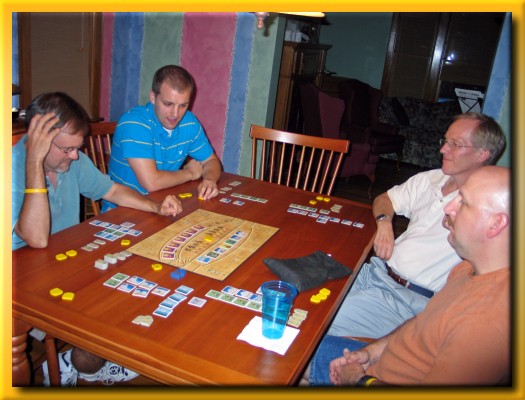 I hosted August 2007’s Game Night at my house tonight. Jason was new to the group but I’d convinced him to give us a try. He’s played Settler’s of Catan many, many times as well as Railroad Tycoon so I didn’t suspect he’d have any problem at all picking up the rules to some other games.

We started off with Ra by Reiner Knizia. This game has had an on-again/off-again lifetime in my group but tonight I think everyone would agree that it was pretty fun. I like how the game is very easy to teach and it moves very quickly. It’s a little tough for new players to understand what’s worth bidding for and for how much but at least there isn’t a steep learning curve for the game. 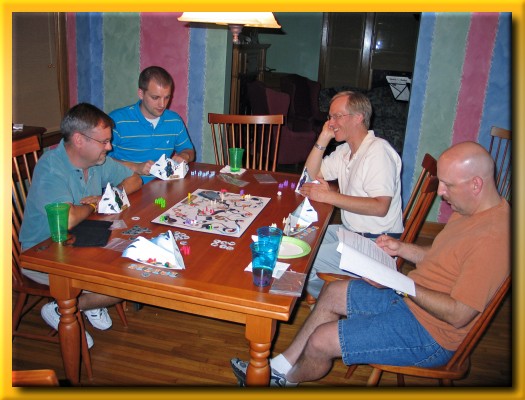 We almost played another game of Ra as our second title but we ended up playing Himalaya for 5. I like this game but it tends to be quite cerebral but I’m not sure if all the effort is worth what at times feels like agony. The decisions can sometimes be tough but in many cases, it might as well be a coin toss which one turns up being the more correct one.

The end-game scoring is a quite strange and can be quite eye-opening if you don’t plan (or misread someone’s position) for delegates being removed from the board when a player doesn’t make it through the scoring of religious influence.

In my next attempt at this game, I’d like to play with the religious influence points inverted from the written rules so that small villages score 3 rather than 1 and large temples score 1 rather than 3. The number of delegates you’re allowed to place would remain, however, the same as the written rules. With this variant, the entire board becomes valuable (for differing reasons) rather than forcing contention into just the larger sites.