The Lexio Cloud #2 on copper. I’m shamelessly looking for thumbs so if you think it deserves one, then knock yourself out. 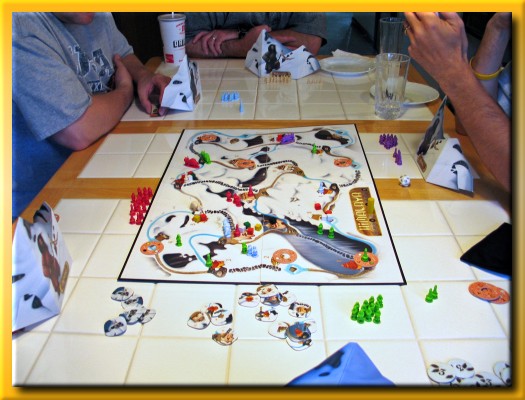 Our July meeting brought out one of my favorites, Himalaya. We had five players so we christened my copy of the 5/6 Expansion. I’m a fan of pick up and deliver games and for me, it doesn’t get much better than Himalaya. I very much enjoy the ‘programming’ aspects of the game and trying to outwit your opponents.

In Himalaya, you have 6 programming chips and each of the 12 rounds calls for you to establish the next 6 moves your yak will take in its quest for goods and order fulfillment. Once you’ve established your secret moves, all players simultaneously expose them to each other. The round is played by circling the table 6 times until all of the moves have been taken in order (no changes allowed!). By the time it’s your chance to take an action in a village, other players may have already taken the action you were hoping to take. To be a good player, you have to be able to 2nd (3rd, 4th, 5th, and 6th!) guess what your opponents will do on their programming moves so that the right goods are available to you and the orders you hope to fulfill are still available when you arrive. 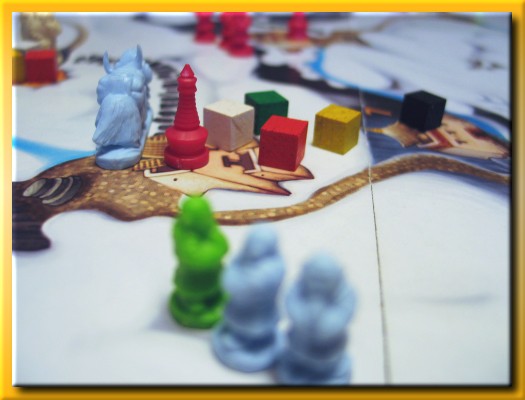 The 5/6 Expansion removes the D20 from the game and in its place, you use 20 chips that determine where goods and orders are restocked at the end of each round. Without the D20, you can predict where goods and orders will arrive which factors into where you should position your yak at the end of the turn. The end-game scoring rules are a little difficult to explain given that you must make several ‘cuts’ before being in the running for the winner. If you’re the least influential in religious or political influence, your massive yak herd may prove useless. 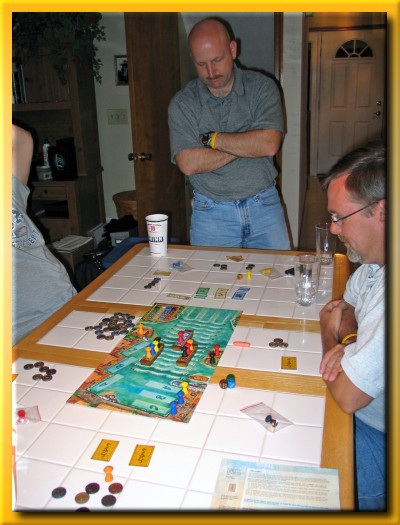 Next up was Manila. Despite its rather cartoony box art, there is a rather nice game enclosed. Players manipulate the value of shares of four black market goods by driving three punts up a river into the port. Punts that make it, increase the value of the goods that were shipped on that punt. Players ‘bet’ on boats making it (or not making it) to the port by paying to place their accomplices at various locations around the board and on the floating punts. Each location comes with it a built-in payout depending on the likelihood of an event occurring.

In the end, it’s all up to the odds of a good or bad dice roll. Monitoring the amount you pay to be harbor master, keeping close tabs on the shares in your hand and the value they have in the black market, and shrewd accomplice placement is key.