Over the last few months, BGG users have been aligning themselves with one of five groups: 1) The Ameritrashers, 2) The Eurosnoots, 3) The “Why can’t we all just get along”s, 4) The “I don’t give a crap”s, and 5) The “Hunh? We’re dividing into groups?!”. I don’t usually get involved in BGG politics because I see it as mostly pointless. In heated debates, email and forums are a horrible medium for expressing one’s views unless one is a very adept writer. Whenever I try to make a point, I usually end up sticking my keyboard in my proverbial Submit button so I’ve learned to keep my distance.

One particular user has, in my opinion, been the most ardent instigator of this battle and today, Aldie banned him from the site. It’s the first time that has happened in the history of BGG-dom. It seems it was a big thing for those that care. For me, I’m moderately glad in hopes that it will usher in the return of more game related posts.

The back story is that he’d been asked several times to stop being so harsh towards people and to focus on the games. He publically refused. Left with no choice (from Aldie’s perspective) he was banned. After the news broke, the forums filled with mud slinging, avatars being flipped to “Long Live…”, harsh words being exchanged between users, mud slinging towards Aldie, mud slinging over the worthiness of some users, cries of freedom of speech, etc. You’d have thought the sky was falling.

This past weekend I played my first two games of Caylus and I was extremely impressed. Yes, I know the game has been around for a very long time and I’m probably the only guy left on BGG who hasn’t formed an opinion of it but I just couldn’t get it to the table.

I’ve owned the game for almost a year now and sadly this is the first time I’ve been able to crack open the box. My gaming group chides me for buying so many games but I deserve it. they never get a chance to play any particular game more than once or twice before I’m pushing some new bauble in front of them.

My first two plays of Caylus were very different from one another although there was a common thread; I didn’t win either of them. The first game was new to all four of us and one player blew us all away when he went on a building frenzy placing all of the juicy stone buildings. We all needed to place our workers in them on subsequent turns for any of us to do much of anything. For the most part, he ignored the castle and just took his lumps for not delivering any batches. Lesson one, don’t let players build all of the ‘good’ buildings.

The second game was played with three-players: two from the first game and one new player. In the first game, the provost was jerked around quite a bit. Almost every turn was enjoyably agonizing. Should I spend an extra coin or two in hopes of being last to pass to guarantee final control over the provost or should I pass now and keep those extra coins for the bridge. In contrast, the second game was a race to the finish with the provost being pushed past the bailiff on most, if not all, turns. The buildings were pretty evenly divided between us (we’d at least learned a little bit from the first game) and in the end, the new player won by batching well and choosing his favors wisely. I came in a strong second with my last two turns requiring a long litany of transactions that had to occur perfectly allowing me to convert an optional building into a residence and then into a prestige building.

I really enjoy the game and thought the board artwork functional. The box cover art left a lot to be desired but I was more interested in the game…until I saw the new artwork Mike Doyle has lined up for the new premium edition due out at Essen later this year. If this version makes its way to the states I won’t be able to resist it. This premium copy is even going to have metal coins! I’ve never bought an updated copy of a game but this may very well be my first. I just hope I can get my hands on a copy. 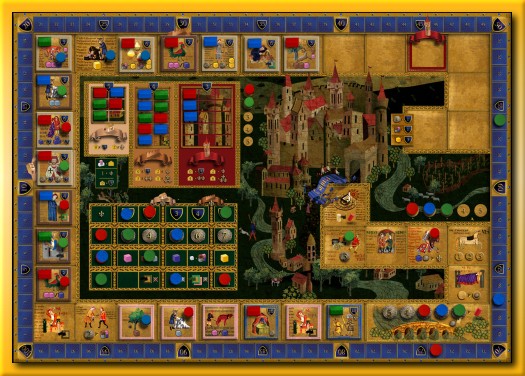 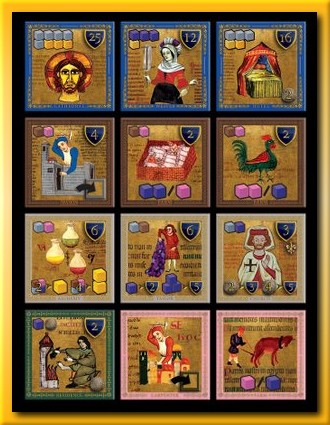 All images taken from Mike’s sneak preview. Full-sized images are available by following the link above.

Cabin Con 2007 has come to a close and I’m exhausted. I rented a cabin atLake Hope State Park and I collected a few close friends for a weekend of great gaming.

It’s amazing the number of games you don’t get to play during an entire weekendof gaming. Once you account for sleeping, meal preparation, cleanup, and socializing, you’releft with a lot less time than you think you have. We had about thirty five games on hand and out of all of them I think the following games are the only ones that saw the table:

I did get to play several of my newer games (Taluva & Trias), and one of my favorite games (Carolus Magnus), and I was very glad to have gotten in my first twogames of Caylus. Even with only two plays, I can see why it’s ranked so highly.

We started playing Twilight at 11:30pm Friday night (pretty stupid idea) and wedidn’t end until almost 9am. One guy fell asleep sitting up towards the end of the game. I’m not terribly fond of the game but in this situation it was a good time to devote a big blockof time to it.

I had a great time and would do it again in a minute. This is the second ‘retreat’ my group has done but I’m still trying to figure out how best to get people tocommit to attending. We had a large group all set to attend and then at the lastminute many cancelled. We still had a quorum and had a great time but thosethat couldn’t attend were truly missed.