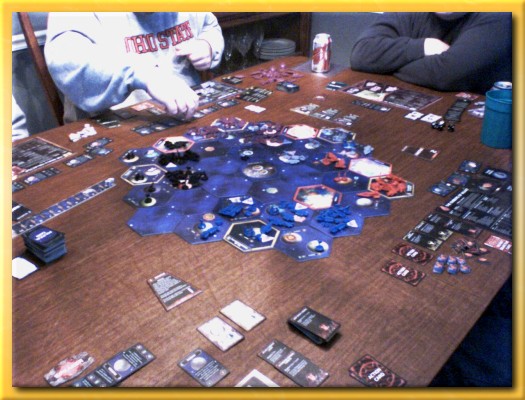 First off…sorry for the crapcam shot of the game. I only had my cell phone and that’s the best I could do with 1 megapixel.

TI3 is an epic empire-building game of interstellar conflict, trade, and struggle for power. Players take the roles of ancient galactic civilizations, each seeking to seize the imperial throne via warfare, diplomacy, and technological progression. With new oversize geomorphic board tiles, finely detailed plastic miniatures, hundreds of cards, and a massive plurality of options, TI3 will arrive before an audience that has been starving for epic space conflict since Twilight Imperium 2nd Edition went out of print in the spring of 2003.

Sounds ‘epic’ doesn’t it? Well, epic or not, the game is listed at 240 minutes but we played 4.5 hours and only got 20% of the way to victory. Three of the five players had played before so play was somewhat slowed down by my incessant questions and requests for clarification. However, I’m not really sure that I was slowing things down all that much. As far as I can tell, 4-6 hours for this game is not uncommon.

I will say this, although it appears complex, it’s actually fairly simple but I question if it’s worth the time. At first blush it appears that you need to battle others to take over planets to garner control of needed points and votes. However, battling is horribly destructive to both sides and winning appeared to actually mean losing ground to those that haven’t battled. So if you’re not battling, you’re spending your time appearing tough so that nobody will attack. This is not a space battle game.

Meanwhile, you amass troops and ships and death stars etc. at a glacial pace while keeping track of that darned technology graph making sure you build out your technology tree to a sufficient depth in case somebody attacks. The whole trading aspect of the game was lost on me as well as the political aspects. The stack of strategy cards eight feet thick was mind numbing. At one point I played a card that let me look through the strategy card deck for one of my choice. The other players moaned and one said, “Okay, now you get to spend the next hour looking through that deck.” Another player threw a sabotage card on me just to keep me from slowing down the game.

So, the cold war build up continues while you try to meet your hidden agenda which usually involved taking control of the heavily fortified center planet. Remembering battle cuts deep, if you manage to take control you will most likely become a sitting duck for someone else to run in and blow you away. I decided to try to control wormholes and position an attack through the worm hole into another system where to three neutral planets were sitting ducks. However, by the time I amassed enough troops to be effective, the worm hole exit had become no-mans land between two factions in a face off. If I popped out then, I’d become a Dreadnaught sandwich. So I decided to attack Rich on my right (I was blue in the image above). Rich was very weak after fighting with gray on his right. I built up troops in the tile on the lower right of the board and then Rich goes and plays the “you can’t attack me card” on me two turns in a row.

So I was left with moving troops towards black’s weak backside on my left. Black was amassing troops at the worm hole exit positioning himself for the attack on the center planet. In the end, I got whipped by planetary defense systems on the fortified planets. By the time we quit, I was only able to grab one stinking victory point by spending 6 hard earned goods tokens on the exposed community goal card.

So in four and half hours I played cold war games with plastic figures and I can’t figure out why? The first hour or more seemed like going through the motions grabbing planets around your home system but I hear there are posted variants that attempt to chop this time off by some sort of quick-play mechanism to get those first few turns out of the way. I’d be up for playing the game again with this variant but not from scratch.

Anybody else having any kind and/or harsh words for the game?