In general, I’m one of the masses of the ‘run of the mill’ users of BGG. I usually lurk without posting and I rarely have anything insightful to state about games or the hobby. I have, however, hit the top ten for submitting a ‘hot’ image several times and I’ve even hit the hottest submitted image on two occasions. I’ve attempted a few serious geeklists but I possess neither the breadth of titles played nor the ability to write coherently about some novel feature of the hobby. So, in general, my ‘thumbs up’ recommendations come from image submissions and inane geeklists.

I recently changed my avatar from the one on the left that represented my fondness for the game Maharaja to the completely non-gaming concept on the right. I’ve been playing so few games lately that I have no more desire to play Maharaja than I do any other of the games in my collection and so I switched to an avatar that represents my recent trip to New Zealand which I greatly enjoyed.

There are a handful of geeks with whom I’ve exchanged personal email and I’ve even met a few in person at CABS (when I was a member) or at Origins. In general though, I stick with playing games with my family and with my regular gaming group made up of current co-workers, co-workers from years past, neighbors, and a brother-in-law thrown in for good measure.

About a year and a half ago, I struck up an email-based conversation with a BGG member who lived in New Zealand. BGG had recently added the ability for users to specify additional profile data about your other likes and dislikes (music, television, books, etc.) and I’d clicked on the ‘woodworker’ tag to see who else liked woodworking.

After a few emails concerning woodworking and the IT industry in NZ we stopped exchanging emails and that was that. When Lisa and I decided to bite the bullet and ‘just do it’ I sent him another email to solicit input on our itinerary and to see if he had any input on other places we might want to see. And wouldn’t you know it that after several emails, he had invited my family to stay with them in New Zealand and to play some games.

We were a little nervous when we arrived about staying with a family we’d never met before but if they were boardgamers, then they can’t be too bad right? When we arrived at their house it wasn’t five minutes and Sophie and Noah had disappeared with their 5 children and Lisa and I settled in nicely with J. and A. (names withheld since I haven’t okayed publicizing their identities). 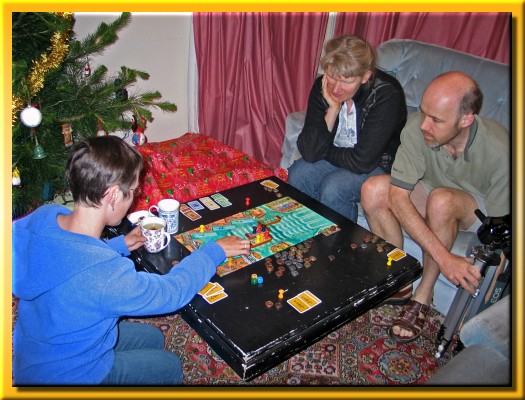 We had brought a copy of Manila as a gift and I think it went over very well. Thanks to BGG, I was able to peruse his collection and be in a better position to offer something that fit their style. Over the course of two nights, we played two games of Manila, a game of Palazzo, Coloretto, and I taught J. the game of Hive using the travel copy I made in my woodshop. 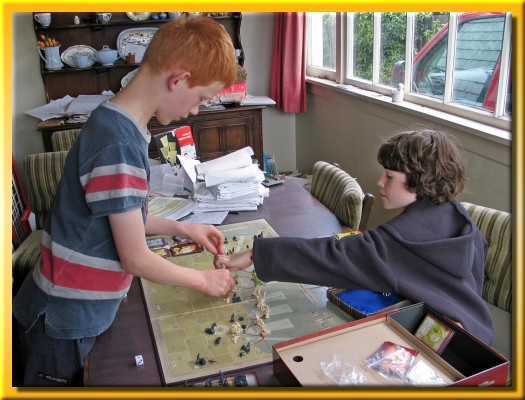 I have very fond memories of our trip and it would have been a really different experience had we not spent time with some very special New Zealand natives that were kind enough to open their home to us, and play some games with us. I also have to commend BGG for providing a great forum for us to communicate on so many levels beyond gaming and in such a way that profoundly changes who we are.