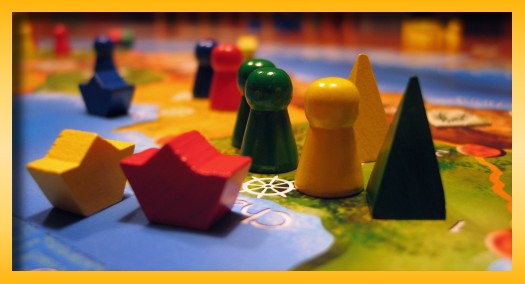 Few games grab me strongly during the first play. I can usually tell whether I’ll like the game well enough but I reserve judgement until I’ve had a few plays under my belt. Even fewer games suck me in during the rule reading. However, Kreta sits atop the category of complete and utter suck-in-ness…and I mean that in a good way. Classification of Kreta is somewhat difficult but it has a very Samurai-like feel to it with hints of Mexica, Maharaja, El Grande, and even Mesopotamia. 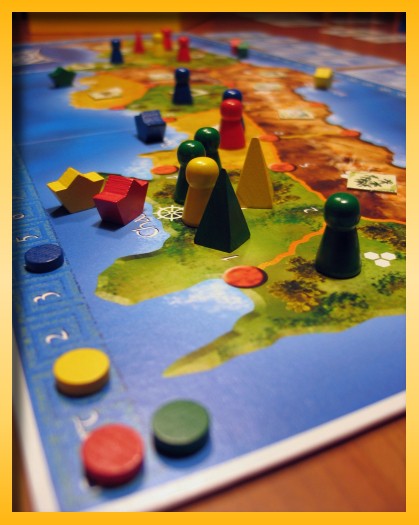 The game begins with the board populated with only the agricultural tiles appropriate for the terrain in which they are grown. Each player receives their deck of role cards (admiral, builder, commander, abbot, farmer, king, and the castellan), a set of five villagers, two ships, three towers, four villages, and one abbot.

On each turn, the player selects a role card from their hand, plays it in front of them declaring to the rest of the players what role he’ll play. He takes the actions granted to him by the role card and play passes to the player to his left. As play continues, each player has fewer roles to play since you can only select the role cards that remain in your hand on subsequent turns.

Your goal is to retain dominance in territories by placement of your villagers, villages, towers, ships, and your abbot when scoring occurs. And to pull that off you must choose your role cards wisely and be smart/lucky about taking the actions those roles grant you.

So, what are the roles and how do you use them? The admiral role allows you to either place one of your ships from your supply onto the harbor of your choice (a territory marked with the captain’s wheel seen in the image below) or move one or both your ships already on the board to the harbor of your choice. Each harbor can only hold a maximum of two ships and they can never be the same color. Ships exert one point of influence towards the territory they are next to (think about them like a one point ship in Samurai).

The builder lets you build a village (the little house-shaped component) or a tower (the cylinder) on the board. A village can be built anywhere you want with the following restrictions: you cannot build a village on 1) a territory that contains seven items (village, villagers, abbot), 2) on a territory that contains an abbot of a different color and and your abbot is not present, and 3) if you haven’t harvested an agricultural tile in sufficient numbers (described later). Villages exert two influence points in the territory. Each territory is separated by what looks like an orange fence and towers can be built upon the circular tower-point that separate the junctions of these fence rows. Towers exert one point of influence upon all territories that surround the junction (think Ronin from Samurai).

The commander lets you place one of the villagers from your supply onto the board or move villagers across the board for up to four territories. You’re free to split the four moves across any number of villagers you choose. The only restrictions on where you can stop are 1) a village can only hold seven items of any type, and 2) if the territory contains one or more abbots, only players who own the abbots may add pieces.

The abbot lets you place your abbot on the board (the triangular shaped component) or move your abbot up to three spaces. Abbots are also restricted by the seven component limit within territories but they are not prohibited from stopping in territories that contain other foreign abbots (as are villagers and villages). The abbot exerts one point of influence in the territory.

The farmer lets you harvest agricultural tiles. Agricultural tiles are important for two reasons: 1) they’re worth instant points on the scoring track and as you collect like-tiles they become increasingly worth more. For example the first cheese tile you collect is worth one point and the second is worth two, the third three, etc. 2) the number of villages you are allowed to build is limited by the number of agricultural tiles you’ve harvested. Since villages exert two influence points in a territory, it can be a devastating blow to be hindered by having not collected tiles in sufficient numbers. The mechanism to collect tiles requires a spatial reference and I hope the image below helps depict the requirements. 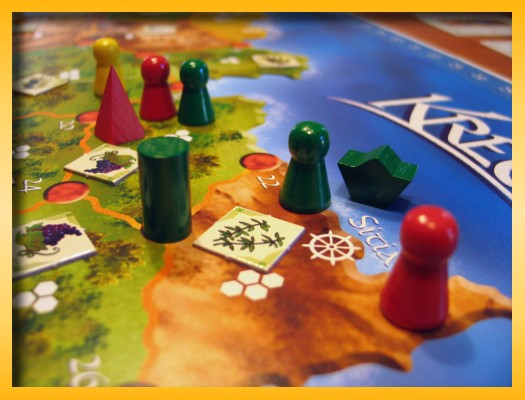 To collect an agricultural tile, players must first have a ship in a harbor. In the image above, the green player has his ship in the harbor marked by the captain’s wheel. The second requirement is that the player must choose a tile in a territory where one of his villagers is currently residing. In the example above, the green player has a villager in a brown territory and another in a green territory containing the herbs and the grapes tiles respectively. The final rule is that the player can only choose tiles that can be linked back to the ship in a line from one territory to the next (think fireman’s water bucket brigade). In the example above, the green player may choose to take either the herbs or the grapes tile because they are linked in a ‘brigade line’ from one territory to the next back to the ship.

The king role allows the player to take the actions of a role played on a previous turn. In essence, the king is a wild card that can become any card that you’ve already played in a previous round. 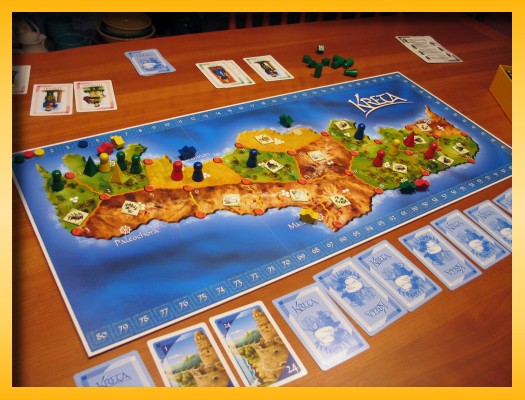 The final role is the castellan which triggers a scoring round. Across the bottom of the board are eleven cards representing a subset of the numbered, orange, tower-junction points on the board. There are always two cards turned upright so that players can plan for the next two tower junctions that will score. When the castellan is played, the leftmost card is chosen and all territories that surround that junction point are scored in the following manner: the player with the most influence points in the region gets all of the points for the territory (the value is depicted by the number of hexes in the territory). Second place receives half the number of points rounded down. Ties for first receive full points (no second place is awarded) and ties for second receive full points.

The player who played the castellan card, then turns over the numbered card that was just scored leaving only one exposed card that depicts the next junction point that will score when the next castellan is played. The player then flips over the card to that card’s right. The player gets one optional move of picking up the just exposed card, stashing it at the bottom of the draw pile, and replacing it with the top most card. After all regions are scored and the new card is exposed, players pick up all of their role cards played from previous rounds and play continues with the next player.

Since there are only eleven cards across the bottom of the board and twenty-six numbered junctions, it is very likely that some will not be scored in each game.

Although I have yet to actually play the game, I’m very excited about what I’ve seen so far. The game has many interrelated mechanisms that make for great game tension.