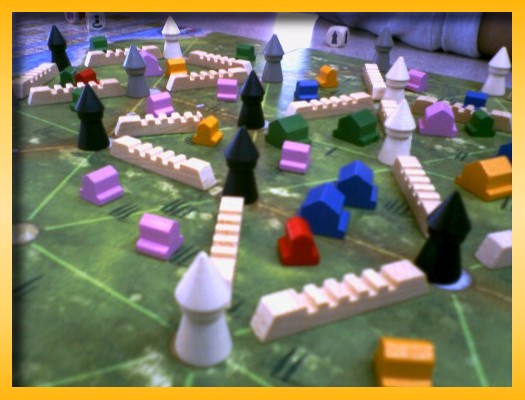 Over lunch on Friday I played Masons with Rich and John S. It was my first play but the game is extremely easy to learn and I’d read through the rules a couple of times and felt comfortable teaching it. Forgive the crap-cam cell phone image.

Masons is not, as you might expect from the way the board looks, an area control game. Instead, the game is an abstract battle of walling off territory spanning three segments of the board. The theme is city building but in my opinion you might as well throw that out the window and just think of it as doo-dad placement.

If you don’t complete a city (by enclosing a segment of the board completely within wooden wall, then your turn is over. If you complete a city, pairs of like colored houses within the city are exchanged for a palace and the player who placed the wall has an opportunity to tear down an adjoining wall with one other city forming a single large city from the two. Once complete a scoring round begins and you can play one or two cards to influence your score. Each player scores in turn and the next round begins. Regardless of the number of cards you play (one or two) during scoring, you can only pick up one card. You may also discard a card and draw two cards as a replacement (you score no points).At the end of a scoring round, all players tied for last place may discard N cards and draw N replacement cards.

The cards depict various board layouts that determine how many points you score. Some refer to the just completed city. For example, a card might grant you 2 points for every white tower in the city. Another might grant the player points for the number of pink houses within the city. Other cards depict scoring opportunities for the entire board. For example, you can score points for all towers not connected to a city that are also next to the shore line (the edges of the board). Others, grant points for the number of blue houses not in cities. Still other cards depict scoring opportunities for one of the three Guild areas on the board.

Overall I like the game quite a bit. It is more abstract that I was expecting but keep in mind that to me, abstract isn’t a very long four-letter word. I am looking forward to more games. 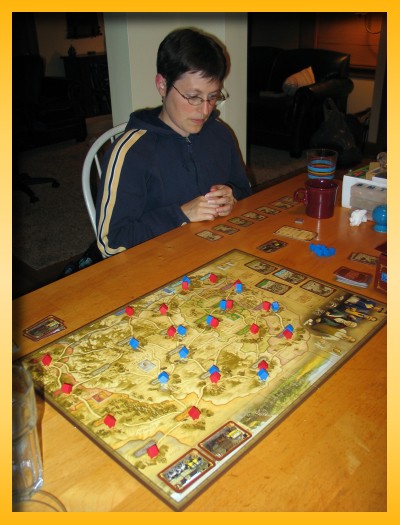 Lisa and I got in a game of Thurn & Taxis last night. It was her first play but I’m thinking she liked it quite a bit. She was pretty tired but was willing to (what she felt) slog through the rules. But after a few turns she perked up and her fighting spirit kicked in. By the end, I managed to beat her by only a few points. Her comment was that she liked the game because it didn’t feel like a hard-core cerebral experience. She likes highly strategic games too but she was glad to have access to a game that is fun, is more meaty than Ticket to Ride, and doesn’t cook your brain making you feel like you won’t sleep the rest of the night.