I’ll come right out and apologize for the lame posting of AGN September 2006 and my Labor Day Weekend Gaming festivities. I was toast after game night and then ended up working until 4:15am this morning. So, you’re getting what you’re getting mostly because I’m tired and I just want to get the monkey off my back.

On Sunday night, Lisa and I played a game of Jambo. As usual my tactics drove me to be card poor the entire game. Unfortunately, I don’t play often enough to have developed a strategy of play. I do, however, know that the strategy I naturally gravitate to is, at a minimum, dumb. Lisa usually kills me and this playing was no exception. It came down to me risking that she couldn’t tie me with 67 gold coins so I sold all my wares and she came up with 20 gold coins on her last turn clocking in 69. Sheesh…I stink at Jambo.

On Monday, my gaming group met to play a lively round of Ra. As you can see from the picture, it was hard to keep everyone contained. This was the group’s first playing (my third) and my first attempt at teaching it. I felt ill-prepared and our first round was a real stinker. I think we had at least 2 or 3 major rule breaks but I think by the end we were playing correctly. I’d like to play a few more times but even after 3 plays I’m trying to figure out if I like it. 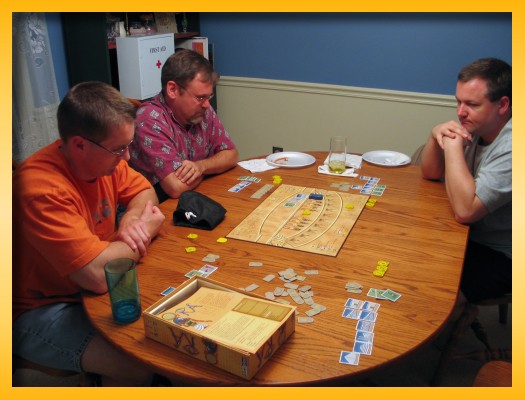 Our final game was Dos Rios. This game is a keeper. I like the tension, the chaos, and the struggle to find a good stategy for not having your guys thrown into the city on every turn.

I suspect that after a few plays one might arrive at an approach to playing the game that you use all the time regardless of the tile layout. At that point I can see the game getting boring but I do enjoy the hunt for that good strategy. 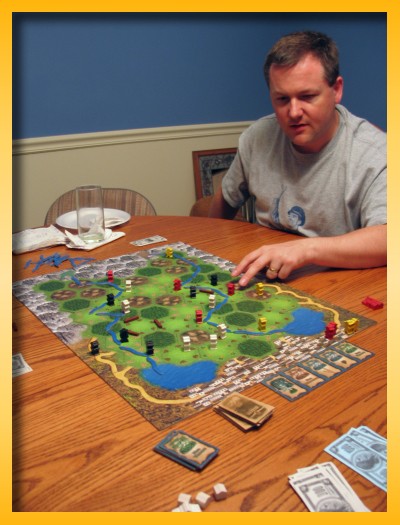 That’s all I can muster at this point. Thanks for hosting Rich. I’m exhausted and I’ve gotta hit the sack.