After a morning of rainy baseball and softball games, Sophie and I sat down for two back to back games of Samurai. We really like the game and she’s beginning to become a worthy opponent.

Samurai, designed by Renier Knizia, has a 4 piece board depicting the islands of Japan, three token types (high hats, Buddhas, and rice paddies), a player screen, and a set of tiles for each player. Players begin the game by placing all of the tokens out onto the connected boards (their counts are adjusted by the number of players) one piece at a time. Each player then selects 5 tiles from their private supply to place behind their screen. All unselected tiles are turned face down and shuffled representing a random draw pile to restock tiles after each play. When Sophie and I play we usually start the game with 5 randomly drawn tiles to remove any sort of advantage I might have at recognizing board layout. Another variant would be to allow a weaker player to hand select their tiles while the stronger player would draw theirs at random.

Play alternates with each player placing one or more tiles from behind their screen onto the board. Once placed the tiles never move (see special tile below). The goal is to cause the tokens to become surrounded on all sides by placed tiles. Once surrounded, the player with the most influence captures the pieces and places them behind their screen for end game scoring.

Influence is determined by summing the numeric values of the adjacent tiles that apply to the captured token. The tiles depict the following flavors of influence:

Some of the tiles have a special Japanese character on them allowing the player to play multiple tiles in the same turn. In general on your turn you can play as many of the specially marked tiles you desire along with an optional single tile without the special mark. After you’ve played all of the tiles you desire, you restock your tiles from your supply until you again have 5 behind your screen. 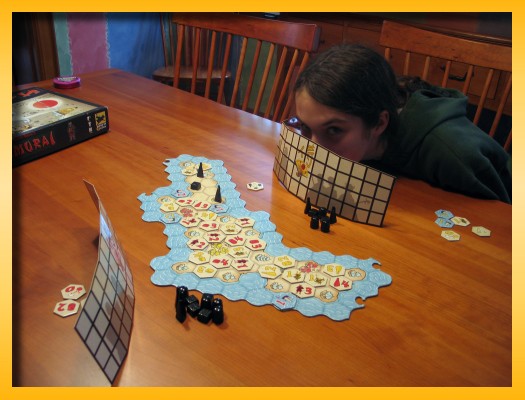 Samurai is possibly my most favored game in my collection. When I found my copy, the game was out of print but I managed to find a dusty copy on a shelf here in Columbus. I found it when I was just getting started in Eurogaming and it still holds the extra special soft spot for me. I like the tense play with the entire range of players (2-4). It plays quickly. It is fast to set up and tear down.

My available gaming time has shrunk over the last few weeks and I don’t see that changing any time soon. Work commitments, adjustments to the new summer schedule, out of town weddings to attend, etc. are really taking a bite out of my free time. I’ll be missing the next CABS meeting since I’ll be in Oklahoma making it my third miss in a row. Bleh!