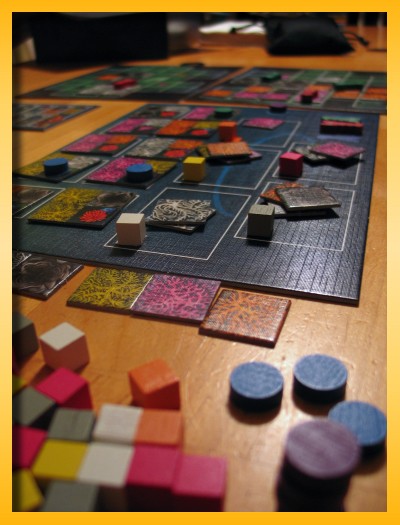 Last night I conned Lisa into trying out a few rounds of 2-player Reef Encounter with me to finish off our 20th Wedding Anniversary. I fully expected to only play a few rounds but wouldn’t you know it but she got involved and didn’t want to stop! She ended up beating me by 6 points (42 to 36)…darned white polyps!

I need a few more plays with different numbers of opponents before I can really say much about the game but I did really enjoy what I’ve experienced so far. The 12 pages of rules from the Z-Man reprint are horrid. I think the game is easier to teach than it is to describe in text. Many of the features of the game are circular in nature and it’s difficult to discuss any one aspect of the game without mentioning others that you must wait until later in the rules to describe. But, I’m getting ahead of myself and I’ll write more about that at a later time. Suffice it to say that Lisa and I talked a lot about the game afterwards and she even mentioned that we should play again soon so that she can play faster. I should clarify that, for her, if she doesn’t play several games quickly back to back, she’ll forget it all and she’ll have to ask a thousand questions again slowing down the game. 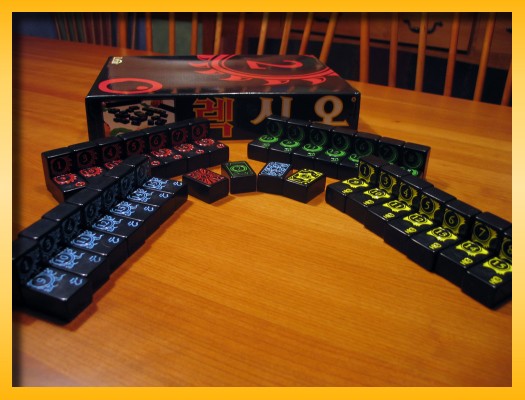 A new game arrived today. Lexio is a 3-5 player game published by the Korean game manufacturer Dagoy. To be honest, I bought the game because it’s simply gorgeous. The tiles are made of the same material as dominoes but very thick measuring 7/8″ wide x 1 1/4″ long x 5/8″ thick. The tiles come numbered 1 through 15 with the number 2 tile adorned with special artwork. The ‘suits’ of the tiles are sun (red), moon (green), star (yellow), and cloud (blue). The game also comes with a set of plastic chips that are used to keep score.

The play in Lexio is very simple and reminiscent of a simplified form of Tichu. Unlike most ‘ladder games’ played with cards, Lexio comes complete with extra cool bits. Players begin the game with a random set of tiles. A round begins with the starting player (the holder of cloud 3) placing a meld of tile(s) onto the table. Play passes to the left and that player must play another meld of the same number of tiles (1, 2, 3, or 5) of higher in rank. If he cannot play, he must pass. Unlike Tichu, there are no bombs or special low or high cards and no Dog since you do not play with a partner. Play continues until all players pass and the player taking the ‘trick’ places the tiles to the side. The tiles used in the tricks are not used for scoring. 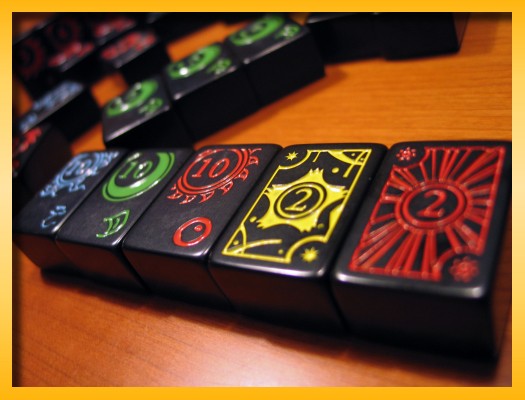 Subsequent hands are begun by the player who won the last hand until someone runs out of tiles triggering the end of a round. At the end of a round each player, beginning with the player who ‘went out’, is paid chips by all other players equal to the difference in the number of tiles remaining in their hands. For each 2 in your hand, you must double the number of chips. Scoring continues with the next player and all other players paying chips to that player, etc. until all players have received their appropriate number of chips from all other players. The game ends when you complete an agreed upon number of rounds (usually 5) or until someone runs out of chips.

I haven’t even played the game yet but I can’t get over how good it looks and feels. The ‘eye candy factor’ and the ‘clack factor’ is extremely nice to behold. My parents are staying with us this weekend to see Noah’s violin recital so maybe I can get them to play a game or two…or three.

One last item, if you’re so inclined to recommend images on BGG, I posted an image of Lexio there…hint, hint 🙂