I got an opportunity to attend an impromptu night of gaming with a couple of guys from CABS last night (Jeff Chunko and Alan Monroe). I was fortunate enough to be able to attend while Lisa volunteered to shuttle kids from baseball, to piano lessons, etc. We met at Alan’s house which is way the hell southwest of Columbus out in the sticks of Galloway, OH. 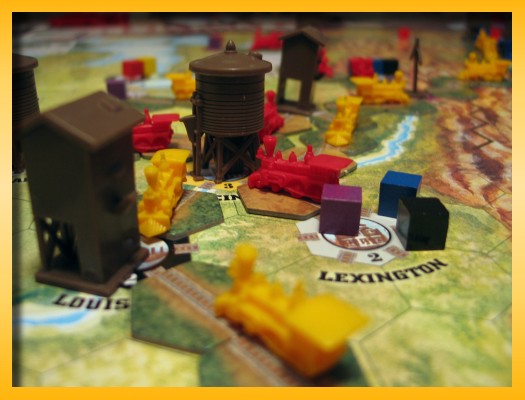 First up was Railroad Tycoon designed by Martin Wallace and Glenn Drover. I’m ashamed to say, I’ve never played a real ‘Train’ game and I was excited to learn. I have studied games enough to know that ‘Train’ games are not just games containing trains. Ticket to Ride nope… Stephenson’s Rocket nope… In fact, it seems there really isn’t a clear definition. This Geeklist of Train Games should give you a good sampling of how the genre is divided.

I quite enjoyed playing Railroad Tycoon even though I’m so very bad on my first playing of any game. I’m one of those people that has to have a dog bite them squarely on the butt before I understand that the end that makes all the noise is dangerous. By the end of the game I began to understand how multiple connected routes are very important and which routes you strive for is very dependent on which colored cubes you’ll be able to ship along those routes.

The game has a degree of randomness to it that I didn’t expect as new cards are turned up. At the beginning of each round, you bid for turn order and not knowing what cards are available and how important they are really hamstrings a new player. Being new you also have no idea how tight money is going to be and I was very hesitant to get into a bidding war bidding on something I knew nothing about. In the end, it was fun and the production quality is top notch. The little buildings that you place on the cities that have been emptied of cubes serve no functional purpose other than eye-candy but it does make the board look exceptionally nice at the game end. The board is divided into three separate sections forming a HUGE(!) playing area. 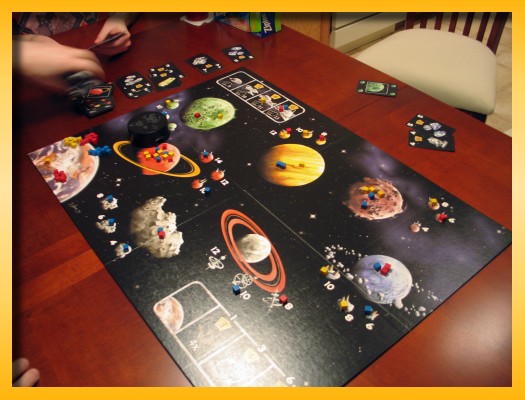 As a closer, we player an older space-themed game called Andromeda designed by Alan R. Moon. The game consists of a board depicting seven planets, each with satellite moons. Each player holds a hand of cards. Each turn finds players trading cards to other players in an attempt to collect melds of cards depicting the desired planets. After the trading phase, players show melds of three or greater allowing them to move cubes from Earth to one of the planets, upgrade technology, upgrade their hand limit, or (the funnest part) select a random cube(s) for placement on the satellite moons. Each moon is worth points of decreasing value so you want to garner the higher valued moons first. The cube selector is a little gimmicky but it looks like a one-slot ash tray. You cover all of the cubes on the planet with the selector, stir (not shaken) and then pull back allowing cubes to be ejected from the little slot. If your cube comes out on your selection, you get to place it permanently on a moon. If it’s another player’s cube, then they have to return to Earth.

I understood this game from the beginning but for the life of me, I could not get the melds I needed when I needed them. I was also relatively late to the table in understanding the importance of maximizing technology upgrades so that I could benefit from the rounding up on the number of actions you can take for each meld.

Thanks for asking me to join you guys. I had fun. Okay…it’s late and I’m off to catch some sleep.