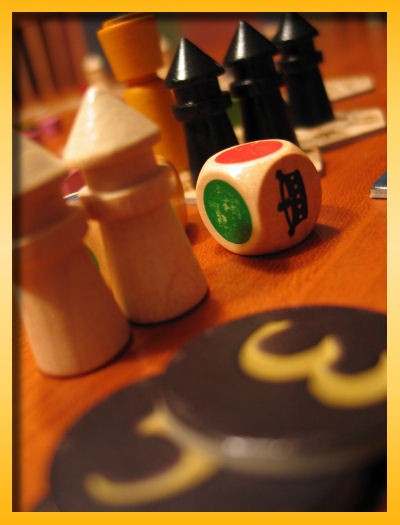 I checked out Carolus Magnus from the CABS game cabinet last week allowing me to tick off another game from my list of wanna plays.

I read through the rules last night and while Sophie was off at piano lessons, Noah and I poured out the contents and run through a quick game. The OCD in me wanted to check that all of the pieces were there and after sifting through the 200 cubes I found that there was one extra red cube but 1 blue and 1 purple cube missing!!! The horrors!!!

We set out the initial 15 region tiles in a circle and then randomly populated them with a single cube taken from the initial set of 15 cubes (3 of each color – red, blue, purple, green, and yellow). Each of us took a set of the 5 turn-order ‘bidding’ chips and a set of 10 castles. We placed the yellow Emperor, rolled the dice to populate our initial 7 paladins (cubes) and began playing.

The bidding is pretty simple since you place a chip in the center of the ring of tiles and your opponent must place a chip of a different number. The player with the smaller number goes first and selects 3 paladins from his reserve of 7 and chooses to place them in his court and/or out onto the tiles. After placing cubes, the player moves the yellow Emperor clockwise from 1 to N tiles where N is the number on the bidding chip.

When the Emperor stops, you determine who has the most influence on the tile and if it has no castle, the more powerful player places a castle. You can ‘attack’ and take over regions if you land on a tile with castles and if you have more influence at the time of the landing. When two adjacent regions are controlled by the same player, the regions are automatically coalesced into a single region containing multiple castles. 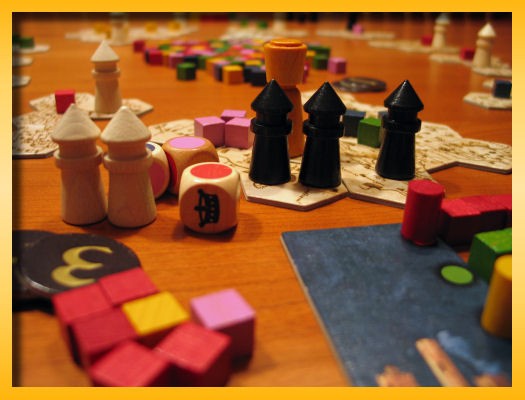 The rules weren’t very clear on this rule and you can see in the upper right corner of the image that there are two adjacent regions with white castles that should have been merged. BGG has a few debates about the merges being required but after digging around a bit, there was a mention that Leo Colovini verified that it is mandatory.

At the end of your turn you restock your reserve back up to 7 paladins by rolling the dice and selecting the colored cubes depicted (crowns are wild). Your court (bottom right in the image) allows you to line up cubes next to the colored dot and if you have the most cubes in the color, you capture the small cylinder declaring you the controller of that color. Being in control of a color is crucial when determining when castles can be placed and when regions can be taken over. Strategy recommendations say to keep your court supplied with cubes early in the game and towards the end game you can start loading up tiles to gather support from the fields during hostile take overs.

The winner is the first player to build all 10 castles or when there are 3 or less remaining regions (2-player game). In the case of the latter condition being met, it’s the player with the fewest castles left that wins.

This was my first playing of the game but I really liked what I saw and felt. The play time is short (30-45 minutes) and it does strike a chord with my obsession with nice bits. I can feel the tension when determining how to bid given what your opponents have in their reserves and what chips they have left. Which cubes to select to play and where to play them also warms up the thinker…in a good way. Having to live with restocking from the dice roll is the only aspect of the game that has me a little worried. There may be variants out there to reduce the random aspects in this area but I might just play it a few times before I go digging for a solution to a problem that might not manifest itself for me.