This wasn’t a minor infraction but instead renders our recent playing of the game a complete exercise in lunacy. Since it was the first time I’d played in 2 years and only the 2nd time I’ve ever played I suppose I can’t fault myself too much. As usual, the game play seemed a little odd in this area and Ken even mentioned it seemed mildly strange but it wasn’t bad enough that it made us stop and say, “that just can’t be!”. Even if we had, I’m not sure we would have caught it given that the Mayfair rules are a little ambiguous and at least one illustrated image is incorrect. I must regrettably acknowledge Ken’s frustration and must say, he was…he was…he was…right. There I said it. Ken was right.

The problem stems from resolving external conflict. When a player places a tile that joins two kingdoms and external conflict occurs, the tile is covered with the ‘handshake’ tile (no cube is awarded for the tile placement) and the conflict must be resolved in the order determined by the player placing the tile. The two warring dynasties must count their supporters on their side of the handshake tile. Then the attacker optionally commits additional supporters and the defender optionally commits supporters. The battle is won by the player with the largest total sum of supporters (ties won by the defender).

Multi-leader conflicts resolve rather strangely when you play the game this incorrectly. For example, say I lay a blue farmer joining two kingdoms and choose to resolve the green trader conflicts first. In our purple haze of interpretation, we would have used blue to determine supporter strength since a blue tile was placed. That in and of itself is strange but think about what happens after the conflict is resolved; after the blue tiles are removed, subsequent conflicts really collapse since your supporters evaporated on the previous conflict.

I knew we would play the game incorrectly but I could not have imagined it would have been so far from the correct path. I guess that means I just need to play some more. Anybody up for another game? 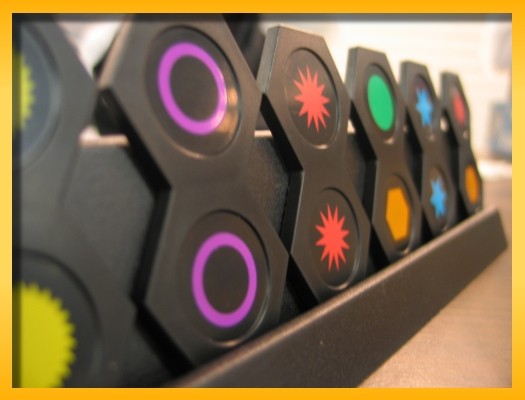 We had six attendees to start with which broke us into two tables, one played four-player Ingenious and the other table played Hive until the seventh player arrived. 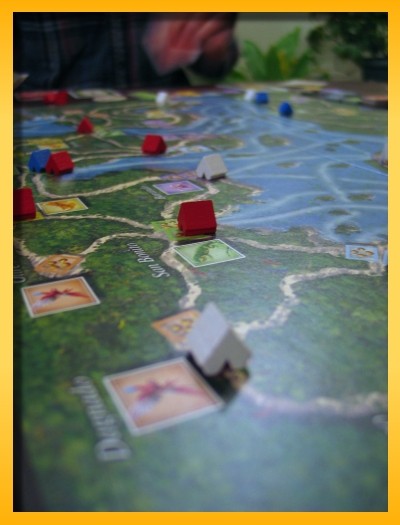 After Ingenious broke up, my table broke out Tigris and Euphrates while the other table played San Juan followed by Amazonas.

Acting like members of the Tourette’s Syndrome Gaming Club, most of the evening was punctuated by spurious cries of “Ingenious!” regardless of what we were playing. 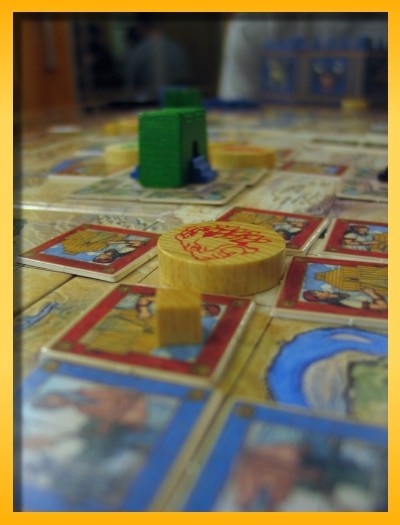 I haven’t played T&E for over two years and it was like learning the game all over again. I don’t think I ever ‘got’ the game when I played before and I’m sure I don’t ‘get’ it now either. There is a lot to think about in the game and the ramifications of a move, in many cases, is difficult to predict until you’re halfway into it. We had situations where two large fully staffed kingdoms united with an external conflict and it was difficult to choose in what order the battles should occur.

Nobody played catastrophe tiles which really should have played on my kingdom (thankfully the weren’t). Had they been played, it would have severed my connection to two revenue generating monuments. Of course, I didn’t mention that fact but I think Mat was almost ready to play one. He didn’t get a chance to play them though when Ken ended the game in such a way that caused all of his leaders to become removed from the board during the battle resolution giving Tim the treasure that triggered the game end. Oh well, I can see it will take many more enjoyable plays to ‘get’ it. 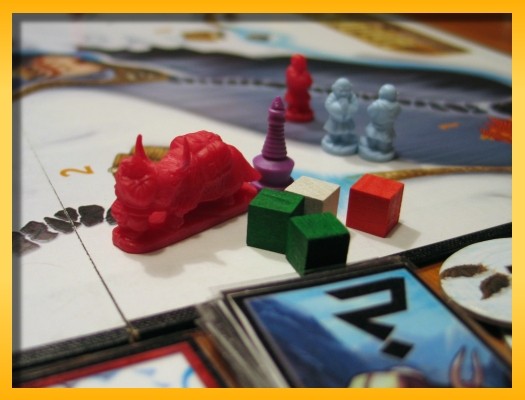 It got a little late to teach the kids Tigris and Euphrates so we decided to play Himalaya with the downloadable d20 replacement cards.

The replacement cards remove the randomness of restocking goods and orders in the villages allowing you to predict where they’ll show up. I didn’t, however, find myself anticipating plunder in particular villages even though some card counted would have given me some future insight. I chalk it up to not fully engaging all of my mental capacities since I was playing with my kids. For those who game with me you know that that’s a crock of heaping crapola but this is my blog not yours.

We hadn’t unpacked the d20 but we ended up getting it out of the box and we used it to indicate the starting player for each round. After the first few rounds we ran out of cards (you use half of them just to setup the board) and I chose to shuffle the discards which took us through the rest of the game. When using the d20, if you roll the number of a village that is already occupied by goods or an order, you’re supposed to just increment the value until you get to an empty village. After the reshuffle, this situation arose for us as well and we chose to just flip up subsequent cards until we exposed an empty village. I hope that’s how you’re supposed to handle that situation but since I can’t read the French on Tilsit’s web site I’m not sure.

Noah has always been a meeple-arranger and tonight was no exception. 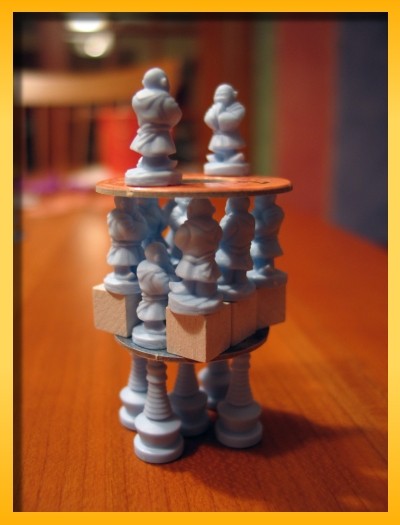 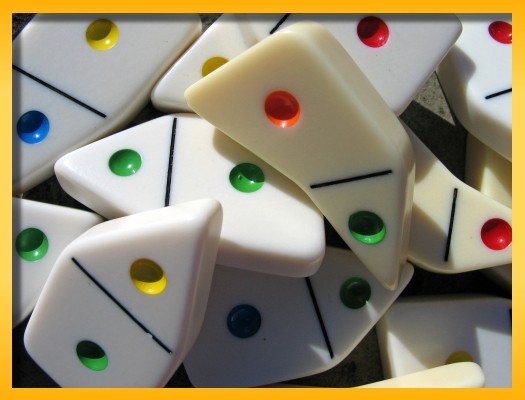 Lisa heard about Chaos Tiles by Ed Pegg Jr. on NPR a few years ago and ordered it. You can really see Ed’s mathematical skills come through when the directions to the game involve validating moves by examining the angle one piece has with another (any play that makes a 20 degree angle is illegal!).

Other than the fantastic ‘bakelite’ pieces, the game is pretty lacking. About the only time the pieces see the light of day is to get them out for the younger crowd to play with like a puzzle. To add insult to injury, getting them back in the 9-sided box requires a cheat-sheet and about 15 minutes of silent meditation.

A recent thread on BGG discussed the topic of meeple nakedness. There were lots of images of meeples taken from games and it’s easy to see why one might think meeples are naked or they at least wear the permanently molded clothing of ‘action figures’ of days gone by.

In pondering this I realized that I had taken some artistic liberties by clothing my meeples when I implemented a Carcassonne game several years ago. The thief however looks a little like something from the Village People…not that there’s anything wrong with that. 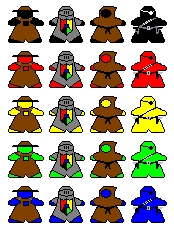 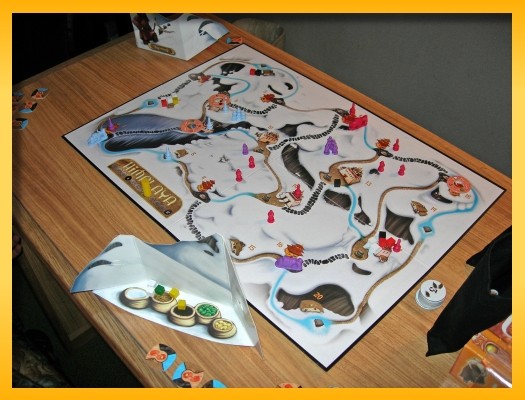 Himalaya is an excellent “pick up and deliver” game where five villages on the board place orders for goods and a different set of five villages manufacture goods ready for shipment. Players traverse the board to pick up goods offered in one village and carry them to distant villages to fulfill orders. When a village’s goods are depleted or an order is fulfilled, a 20-sided die (20d) is rolled to choose another village to manufacture goods or place an order. At the beginning of each round, there are always five villages producing goods and five villages with unfulfilled orders.

The game is pretty neat but it does suffer somewhat from the use of the 20d. With the 20d, players cannot count on an even distribution across villages throughout the game. If players could predict where goods and orders will be available in upcoming rounds, they can begin to incorporate that knowledge into a strategy of traversing the board. Tilsit has recently made available card paste-ups that replace the 20d. The cards, are shuffled at the beginning of the game and then turned up, one at a time, when a new village must be selected. The cards depict all twenty villages so players can predict the likelihood of a specific village being next in line. 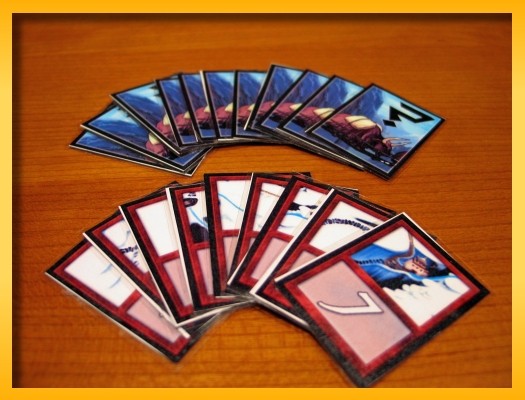 I downloaded the card fronts and backs and my gaming buddy King “I Love Imperial Margarine” Keith printed them out for me. I don’t have a laminator but I did my best with clear packing tape. I’m looking forward to playing with the variant and plan to post a full review in the near future.