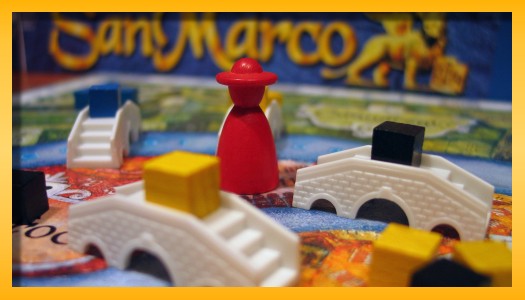 I’ll be honest though, the bits are what initially caught my eye. The artwork for the map of Venice is very nicely done. The wooden components are standard Euro quality but the cool red Doge pawn and the little arched bridges make for a game that’s very pleasing to look at. I’ve been interested in the game for years but never had the opportunity to get my hands on it. My recent increase in gaming activity led me to my recent joining of CABS which put me in direct contact with a copy that I could checkout from the library and take home and fondle.

I slept late after my late night of CABS gaming and awoke with high hopes and I planned my day carefully to carve out some time that evening to read through the rules and play a round or two. That night I opened the box, looked over the cool components, and sat down with the rules.

San Marco uses the ‘divide and choose’ mechanic throughout three ‘passages’ (i.e. uber-rounds). Each passage is made up an indeterminate number rounds each of which requires the players to take on roles where some players (distributors) draw cards, inspect them, and divide them into two offerings (i.e. piles of cards). Those players that were not distributors (i.e. decision makers), pick up the cards offered to them by their corresponding distributor, examine them and choose which group of cards they want to play the round with. The distributors then must play with the cards that were not chosen by their decision maker. So in short, distributors do the ‘dividing’ and the decision makers do the ‘choosing’.

So, how does the distributor role get chosen? You’d suspect some sort of round-robin approach where everyone gets a chance right? Well, that’s not possible given the additional rule that as a round is played out, players can be dropped out until the start of the next passage. So the game design calls for the role of the distributor to be chosen at random. With four players you have two distributors and two decision makers. So…say I get stuck with being the distributor more than others. That could be good I suppose, if I’m a good distributor and if I like performing that role. Being distributor seems like a good way to at least feel like you’re in direct control of the game.

So far, it looks pretty good. But wait just a minute more…

What if I work really hard as the distributor but the decision makers keep choosing the bone headed offering (from their perspective)? In addition, how long is it going to take for the distributors to compose their offerings? That’s got to be a tough decision and given the number of cards you’ve got a lot of options to run through in your head. And then, if that didn’t take long enough, then after the offerings are exposed, then the decision makers will have to go through a period of card examination to determine which offering makes the most sense for them. With the group I play with, we’d be lucky to get through a single passage in 4 hours! And finally, it seems the game hinges on someone making a mistake. A single screwed up distribution and/or decision could turn the game.

I’m not saying that San Marco is a bad game. Honestly, I don’t think that games themselves have the ability to stink. The game might not be appropriate in some situations but that doesn’t mean it stinks. That said though, San Marco is the first game I’ve ever come across that was so highly rated and yet seemed so poorly aligned to my group and to my style and desire of play. The downtime would be horrendous for us. I cannot think of another Euro that I’ve read the rules to and immediately came to the conclusion that I didn’t want to play it. The bits are so cool that I wish there was another set of rules to go with them.

San Marco may be right for your gaming group and if it is, then I’m glad that you’ve found some enjoyment in it. I, on the other hand, will toss it aside lightly…maybe even with great force.