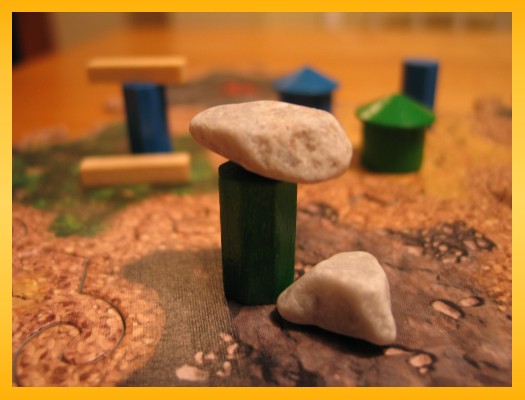 My latest game order included a copy of Mesopotamia. I placed the order to get copies of China, For Sale, and Ingenious but at the last minute I threw in Mesopotamia. It had been described as a lighter Tikal and it played in 45 minutes. The game bits from Phalanx Games/Mayfair Games were top notch (including real rocks!) and it was designed by Klaus-Jürgen Wrede of Carcassonne fame. BGG members had given it a 6.98/10 rating which is pretty high. The best of the best rate only in the 8’s.

I was excited to crack open the box and sift through the cool bits and last night was my chance. A quick read through the short rules gave me high hopes that this one would be a hit. I had a couple of questions but Noah freed up working on some Invention Convention items and he wanted to play a sample round or two.

He and I set up the start of the modular board for two-players as depicted in the rules and removed the necessary bits. After a few rounds we worked out the kinks and were going along pretty smoothly. We encountered one of my questions from the rule read-through (can you build two huts on a plains tile if you have two tribesmen and they’re both carrying wood). It was time to shut down the game so Noah could head to bed which gave me some time to investigate my questions on BGG.

After getting the kids off to bed, I jumped on the kid’s computer (my computer died and I’m waiting on the new Dell) and started browsing BGG’s entry for Mesopotamia. That’s where I got too much information.

I quickly found the answer to my question (no…you need 4 tribesmen carrying at least 2 wood) but I also found quite a few session reports and reviews that I felt compelled to read but now I’m wishing I wouldn’t have. Maybe I should have read them before I bought the game but after playing the little bit that I did, I’m thinking maybe not. Some of the session reports and reviews classified the game as having a low replay value. The reviewers were concerned that the rush for stone to increase your mana rating early was crucial to even being in the running for the end game. Reading that really bummed me out. For me, it’s like telling me what happens at the end of the movie; reading me the last page of the book. I don’t want to know that information. I’d rather find that after 25 plays of the game that I’ve grown tired of it. But now, I’ve been pushed to the end of the game. My mind is playing with rose colored glasses.

I think next time I’m going to buy a game, I’ll just look at the pictures, take a look at the rating, and look at geek buddy analysis comments…nothing more.

By the way, the race for stone was caused by an incorrect English translation. Stone delivered to the temple is not removed from the game. Instead it’s put back in the supply just like it is when you construct a Holy Place.