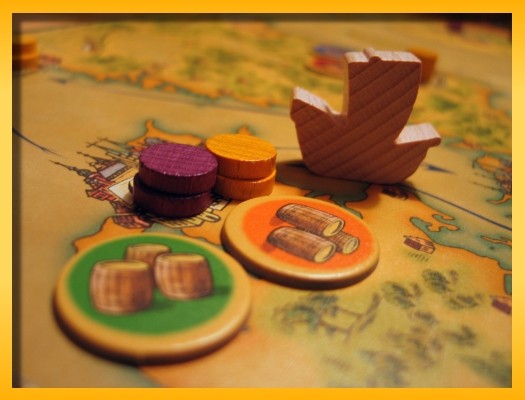 While the kids were watching a DVD on their computer, Lisa and I played Hansa by Michael Schacht. Lisa quipped with me about subjecting her to a game she’s never played before. I shot back that she can’t remember how to play any game from one time to the next so I might as well play a game that I don’t get to play very often…

As she puts it, she’s good at games right out of the shoot but she feels like she doesn’t get any better. Probably because she’s a little like the guy in the movie Memento where every play is her first play 🙂

Hansa is pretty easy to learn but the rules, although short, cause some understandable confusion. Moving the ship and restocking the warehouses cost a taler…that’s pretty straightforward. Buying a good in a port costs a taler (unless you have the majority of markets) and that’s pretty easy to keep straight. But how you ‘pay’ to build markets in a port just doesn’t stick in your brain. It seems awkward that you pay one of your purchased goods to build a market and the number of markets built is determined by the number of barrels depicted on the goods chip. If keeping that straight isn’t enough, you bank victory points by selling goods. Selling costs no talers but you lose a market when you do…and anyone with goods in the same color loses a goods chip in the matching color.

I understand the mechanics and how they compliment each other very well but there’s something about the association of the mechanics to the theme of buying & selling goods, and building markets that I have mild difficulty remembering. It’s not really that bad but it does stand out as a hurdle to retaining a clear picture of the rules.

As usual, though Lisa picked up on the rules pretty quickly and started to make quick work of the board. She was good at leaving the ship in an area difficult for me to turn a quick profit and tried very hard not to restock the board. Over the course of the game, I restocked twice and she only restocked once, triggering the end of the game. Lisa dominated the Tonsberg, Aalborg, Copenhagen conduit for the first half of the game until I finally took control of Aalborg and Tonsberg. Reval and Riga didn’t see much traffic either but we did vie for the majority in Danzig.

In the end, Lisa thought she had the edge on victory points earned from selling goods. Our market placements earned us the same number of victory points so it came down to sold goods. The final score of my 50 to her 47 made for a good game. I don’t get to play games very often with her since she’s so busy but it felt good to sit down and play with the kids only 10 feet away watching the movie.

Hansa gets classified by many as a dry game but regardless, I like it quite a bit. My copy of China should be arriving this Tuesday and I’m hoping it’s another hit by Schacht.