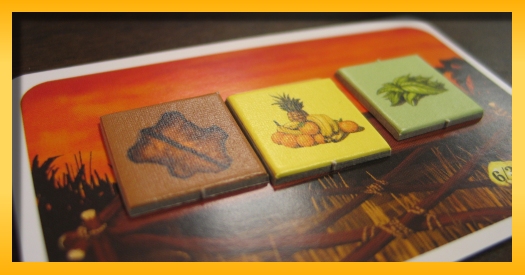 I arrived at New Market Mall at 6:45 to a sparse group of gamers. I’m not sure if March Madness was keeping people away but it felt like the crowd might not break 80. Rich, a buddy from Analog Game Night (AGN) Group, was going to drop by around 7pm so I started looking for a game that we could get involved in. I couldn’t find an open game so when Rich arrived, he and I played a game of Jambo. Rich had never played and I failed to get his feedback so I’m not sure if he liked it or not. Jambo is one of my favorite two-player games but I hesitated to play it at CABS because I knew Jeff Chunko would chide us for playing a two-player game when there are so many group games to play. I had warned Rich that he might and as expected Jeff fulfilled his role with flying colors (just kidding Jeff!). 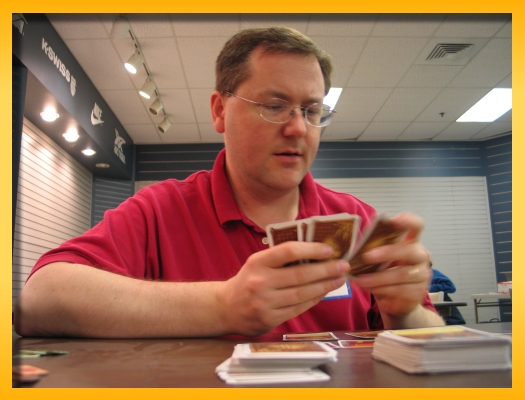 I’m always at the mercy of my innate “sucky card karma”. Although Rich won, I felt happy with the knowledge that I needed just one card for the win, putting up the good fight with only one small market against Rich’s three. Jambo isn’t something I want to play all of the time but I do find it a respectable filler. 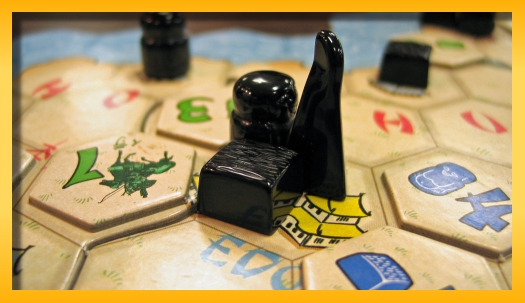 After Jambo, I linked up with Jeff Wolfe who participates in my giant geeklist on BGG. We picked up a fourth player and performed the requisite hummin’ and hawin’ in front of the CABS game cabinets. Nobody seemed to want to commit to anything so I offered my copy of Samurai. I quickly went through the rules and we got down to business. I ended up with the majority of Rice Paddies but Jeff ended up winning with the other two majorities. The key to Samurai is to engage others at just the right moment and level of effort so that they lay tiles near the pieces you want but in such a way that you can still retain majority. Attempting to capture pieces, without help from others, over commits your efforts into one area putting you on the sure road to disaster.

After Samurai, we stared blankly at the game cabinets again. I’m starting to feel like I need to line up the games I want to play in advance so that I can come in with a plan. My plan certainly wouldn’t be an attempt to dictate the games to play but I don’t enjoy the indecision of what to play next. I’m open to play just about anything but I’m also not hesitant to voice my opinion if I don’t like a game. There are lots of games in the cabinet that I’ve read about on BGG and I’d love to play them at least once. However, I’ve noticed a hesitance to play many of these games. For example, I have never played, San Marco, Web of Power, Oasis, Carolus Magnus, or Dos Rios but my mention of them falls like a lead balloon. I really can’t complain though. Being so new to the group, gazing into the game cabinet still has that “Christmas Morning” effect on me. I just want to grab the toys that are new to me. It’s for that reason that my check-outs from the library will be these games; San Marco is first up. If I only read through the rules at home, I’ll be more prepared to play at the next meeting. Okay, enough of that…and back to the games. 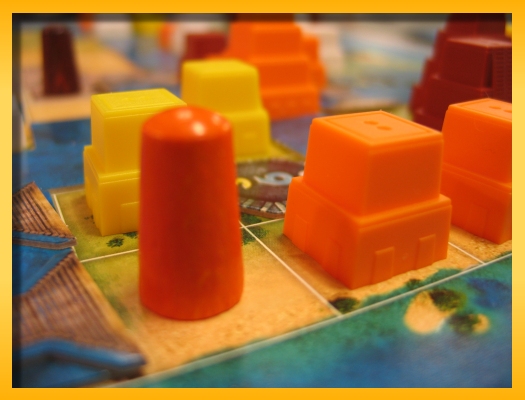 To break the indecision I offered my copy of Mexica. I haven’t played this great game for years and it’s on my “blow off the dust and play it stupid!” list. I’ll be posting a full review soon but I really like the game even though I so totally suck at it. Being one of the Kramer/Kiesling “Mask Trilogy” games (Java, Tikal, Mexica), it’s an action-point, area-control game. Jeff Wolfe was the clear winner and I came up last. More on that in another post. Boy, do I suck at this game but I want to play again…now! 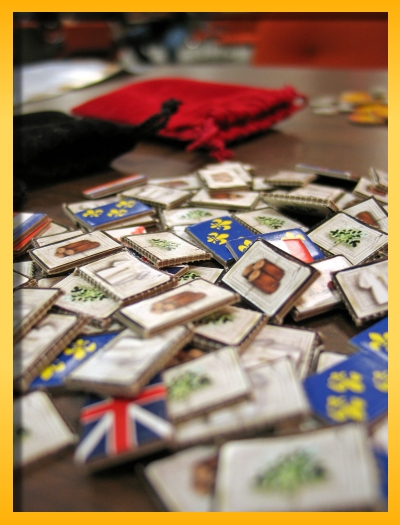 Rich left around 1am after Mexica and again…the indecision. Jeff and I linked up with Alan to play his copy of Plunder. The game vaguely reminded me of Ice Pirates of Harbor Grace even though it’s really a much different game. In Plunder, you sail your ship out onto the ever expanding board as cards are placed on the table. Open Sea, Ports, and Coastline cards are placed in a grid pattern determining where you can sail. France, Holland, England, and Spain ply the waters and you attack them to plunder goods. Wars between countries can break out limiting your ability to sell goods in ports controlled by those countries. The game doesn’t use dice to resolve battle but, instead, uses cards that play multiple roles in the game depending on how and when they’re played. I appreciate the nice artwork on the cards and the huge pile of cardboard coins and chits representing flags from countries and the goods you can plunder. I found the game engaging but it ended abruptly leaving everyone with, as Jeff put it, a Fluxx like feeling. Jeff and I were pretty close to being tied but after two more rounds, he’d doubled his money and won. I’d play it a few more times to see how it feels in different situations but I don’t generally like games that have a widely varying play time.

Boy, this was a long post and if you made it this far, I appreciate it. I’d be interested in hearing how you feel about the games I’ve mentioned. Now…time for a nap. Getting home at 2:30am is getting harder and harder to recover from.