The second game in my review package from Cambridge Games Factory was Ice Pirates of Harbour Grace. The game comespackaged with the same “Board Games in Bag” concept as doesSneeze and Glory to Rome. Unlike Sneeze, the Ice Pirates bag makes you feel like your really getting something here. The bag is filled with cards, dice, plastic poker-style chips, and little colored clips. I was a little curious how they were going to make the “ice” and “pirate” themes work together but I’m happy to say they pulled it off fairly well.

Ice Pirates is a deeper game than Sneeze but still on the light family-fare end of the gaming spectrum. The game setup begins by laying out the face-down cards that represent Conception Bay with Bell Island in the middle. Six ports surround Conception Bay and each of the ports holds special upgrade cards that grant the player additional abilities (jib, telescope, grappling hook, main sail, ice-breaker, and cannon). All ships (a card depicting your ship tucked into the color coded clip) start in the center of Conception Bay on Bell island. Like Sneeze, there is a wind card that indicates the direction of the wind. A little confusing at first but understandably so to make the game mechanics work, the wind can only come from six directions and a roll of the six-sided die determines from which port the wind is blowing.

You goal is to ‘explore’ Conception Bay by deciding in which direction you are going to sail and once chosen you turn over the bay card (if not already face up) and move your ship onto the card. You can choose to sail in any of the 6 directions of the wind but sailing with the wind (3 of the directions) gives you the ability to sail one more additional card in the bay. Tacking, sailing in one of the other two directions not directly into the wind, affords you a single move but you lose the ability to move an additional card. Sailing directly into the wind will cost you a crew member chip. 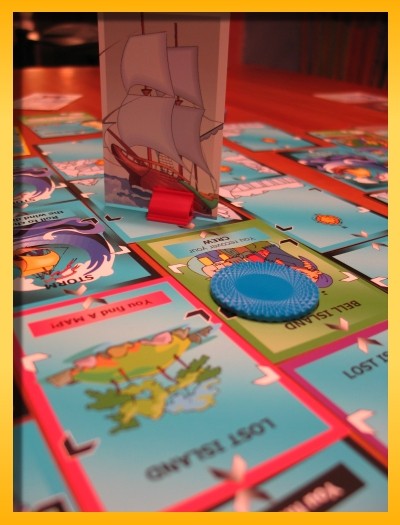 The exposed bay cards depict icebergs (that block card traversals), lost islands, additional crew cards, storms, and if you’re lucky a treasure. Visiting lost islands allow you to obtain map cards that will help you find the treasure. When you find an additional crew card, you can raise the level of your crew above the normal level to protect yourself in battle. The dreaded storms can cause a change in the wind direction which may thwart you and your opponents ability to carry out your plans to sail in another direction.

Conception Bay, also holds a treasure card and if you are the lucky pirate to hold all three map cards from the lost islands and the treasure, you can make a run for open water between ports one & two or the port of Harbour Grace. If you make it, you win. Repeated plays tell me though, that you’re going to have to fight your way out. Ice Pirates, comes with battle dice that allows your opponents to raid your ship in an attempt to take your maps and treasure. Raided pirates can fight back in a ‘Swashbuckling’ maneuver but every attempt to fight back costs you a crew member. The battle mechanic seems to keep the dice rolling to a minimum which I greatly appreciate and setting a maximum level of attack (even for ‘rich’ pirates) affords even relatively weak pirates a fighting chance. 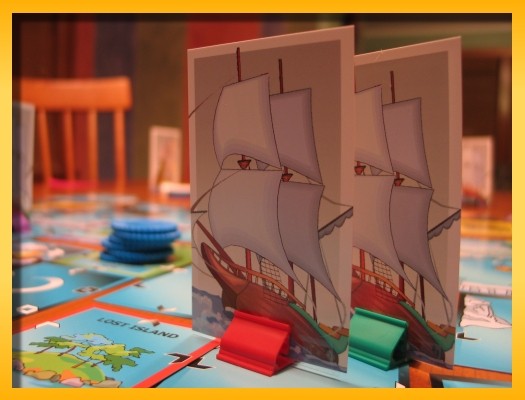 I’ve enjoyed playing Ice Pirates and my kids seem to like the game play as well. Although more interesting in theme and game play than Sneeze I’m not sure it will see the table as often. Flipping cards in Conception Bay has a somewhat fiddely feel to it and setup is definitely longer. The components are of the same quality as Sneeze but I have the same, albeit picky, complaint of the square cornered cards and the ‘bagged’ rather than ‘boxed’ production. Overall the components are well made for the price-level, and the rules are cleanly written.

With Sneeze, our house rule was that when you sneezed, you had to make up what a sneeze might sound like for the allergies in your hand. In Ice Pirates, we continued the tradition by requiring everyone to talk piratey and pronouncing Swashbuckle as “Shwashbuckle”. I can’t explain why that made it more fun, but when your kids come up with their own ideas that make them laugh, it gets a little infectious. 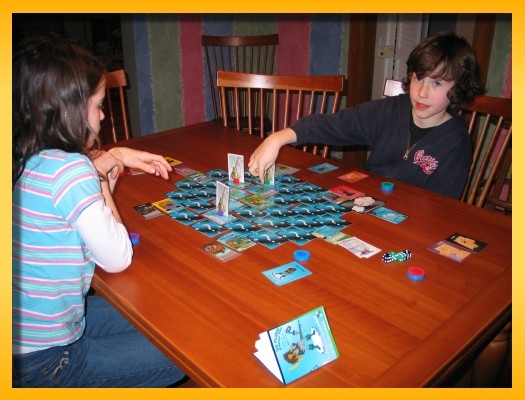