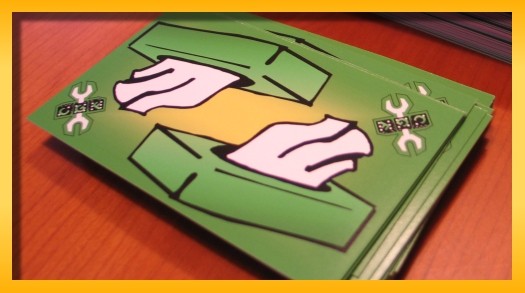 Through correspondence on BGG and through some private emails with Ed Carter I was able to get my hands on review copies of three games from Cambridge Games Factory. This review will cover only the game Sneeze. I have played Ice Pirates of Harbor Grace but I need to play a few more times and with sufficiently different numbers of players before I’ll feel qualified to give it my best. I’m also itching to play Glory to Rome but I haven’t had a chance to crack the seal on that one yet. It’s my understanding that they’re still making some rule tweaks to yet another game, Splat! and they’re not quite ready for a review. Ed assured me he’d ship out a copy once the play testers had okayed the changes.

Sneeze is a light family-style game that plays quickly and is really good for all ages. The listed age limit is 6 and up but I wouldn’t be surprised if some younger kids could play along with some supervision from mom & dad. The game plays quickly and is mostly luck-based but it does provide some degree of tactical play that helps the older players stay interested. The game does support up to six players which does make it a nice filler/closer game for Euro-gaming groups, families, and friendly gatherings of various sizes. I don’t use the term filler or closer lightly here and I’m glad to have another game in my collection to use to warm up a group and/or to close out the evening in warm-down sessions. 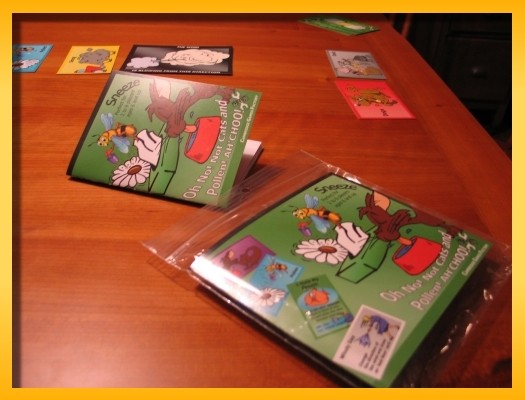 Sneeze is packaged in a zip-lock style bag which provides sufficient containment but the game could benefit from a box. I like to keep a clean Game Cabinet and stacking the bagged games is somewhat troublesome. Box packaging would also provide yet another outlet for displaying artwork and the Cambridge Games Factory logo which they seem to love to place on about every playing piece. The Sneeze cards are well made and the artwork is simple but well done. My only complaint about the cards is the square corners. It is a somewhat picky point to make but it is surprising how often you notice yourself picking the card up by getting a fingernail under a corner causing some damage to the card. Over time (especially in Ice Pirates) this could become a problem. The rules are produced in a booklet-style (3.5″ x 4.5″) and provide ample examples and a straightforward explanation to the game. 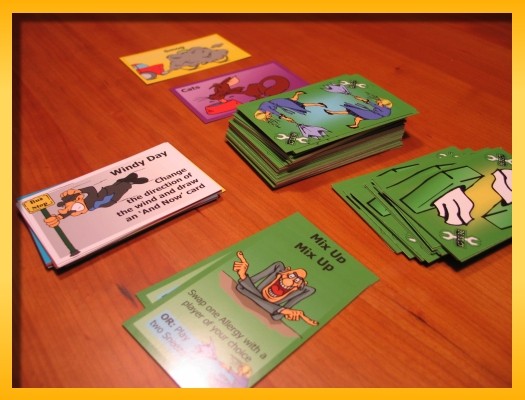 Sneeze begins with one deck of “Sneeze” cards and another deck of “And Now…” cards placed side by side in the center of the table. Near the decks but to one side, a large “Wind” card indicates the direction of the wind. Between the “Wind” card and the decks is an open space dubbed the “upwind pool”. The other side of the decks represents the “downwind pool”. Each player starts with a “Sneeze” card flipped face up in their play area. Play begins with the first player drawing a Sneeze card and without looking at the card, placing it face up in either the upwind or the downwind pools. The face of the Sneeze cards contain colorful images of cats, dogs, pollen, smog, and dust. If the upwind pool contains cards that match all of a player’s face up Sneeze cards, then they Sneeze! 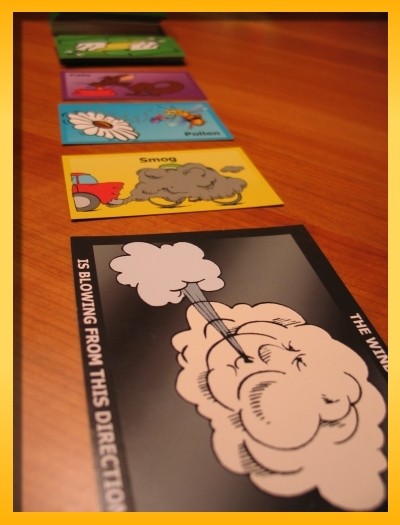 When players sneeze, they draw another Sneeze card and place it face up in front of them making it harder for them to sneeze since it takes more cards in the pool to match their hand. Players who make others sneeze and the sneezing player also draw a card from the “And Now…” deck. These cards hold special tactical abilities that can be played on your turn instead of drawing a new Sneeze card. The “And Now…” cards let you manipulate the pools, swap Sneeze cards in your play area with another player, etc. Throughout the game, many circumstances can cause the wind to change direction to the other side of the decks making the downwind pool the upwind pool and vice versa. When this happens, Sneeze cards that were thrown into the downwind pool might immediately make people sneeze.

As play progresses, players amass additional Sneeze cards in their areas up to a limit of four. Sneeze has a novel approach to evening out the leaders by making it harder and harder to make people sneeze and by the end game, making someone sneeze will actually hurt the leaders by making them take on additional sneeze cards. The winner is the last person to have less than four Sneeze cards in play or the last person to make someone Sneeze if doing so makes everyone have four cards.

I purposefully played Sneeze with my kids to get their reaction to the game and they can’t say enough good things about it. Noah even asked to play tonight without any prompting from me. Although my kids really like it, I wouldn’t relegate Sneeze to the kid’s shelf in the Game Cabinet. I’m happy to have another game on the shelf next to my copies of Coloretto, 6-Nimmt, etc. and look forward to pulling it out again for a quick 15-20 minute game.