On my 40th birthday, my wife and friends organized a surprise gaming weekend for just me and my board gaming cohorts at a cabin in a state park south of Columbus, Ohio. When I arrived home from work they sprang their surprise and proceeded to throw me in the car and 45 minutes later we were unpacking huge amounts of food for the grill and I was unpacking a huge box of games that my wife had gotten for me.

I had a blast and ever since I’ve wanted to organize another one for the group. There’s really nothing like dedicating a huge block of time focussed on gaming with your friends. Sure, there are cons to go to but this was much more intimate if I’m allowed to use that term with a bunch of guys. We’re all software developers and we all share the same sorts of humor and life experiences. For lack of a better word for it, the weekend was a bonding experience for us.

Fast forward six months and I now realize that it’s much harder to organize something like that than I expected and I’ve come to really appreciate the work that went into the first one. Getting dates organized, determing the amount of money people want to spend, deciding where to go, determining how to get more people involved, etc. all proved difficult. In our case, group think started kicking in where some people had ideas and voiced them, others wanted to wait to get involved after the plans firmed up, and still others just wouldn’t or couldn’t commit to anything that far in advance. The biggest issue was that few members of the group are as geeky about games as I am and requiring them to devote an entire weekend and a few hundred dollars to participate would mean I’d be gaming with at most only one or two other people.

We finally decided to go the cheapest way we could think of by packing as much gaming as possible in the shortest amount of time to keep the maximum number of people involved. So this Friday, I’m hosting a gaming extravaganza at my house for about 10 gamers that will start at 7pm and will run until 7am when we’ll close down the gaming and head out for breakfast. Lisa is taking herself and the kids over to her sister’s house whose husband, by the way, will be heading over to enjoy the gaming extravaganza.

I have to thank Lisa for being so supportive of my hobby. In addition to entrusting me with the safety of our house in the face of the sheer number of unwashed masses, she is also fixing a ton a food us. She’s even got smoked salmon on the docket! She also looked around today for a couple pieces of furniture and found a shelving unit nice enough to have out in our family room and it would be dedicated to storing my games. She said, she doesn’t like buying stuff that looks good but doesn’t say anything about us as a family and having our games out is like decorating. The games represent us so they should be out where people can see them. Wow. 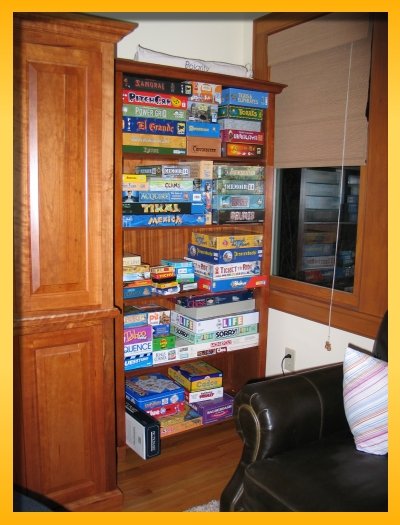 It’s been a long time coming and I’m about ready to pop with anticipation of it going well and, even better, getting enough time to play some new games we’ve never played with a group of really great guys. We’ve opened it up to a few new people that have never gamed with us before and I’m anxious about them having a good time too. I’ve got to relax a bit and let others help choose what to play but I’ve got big plans already forming in my head. This list is in no particular order but I really want to play the following games at some point during the night: