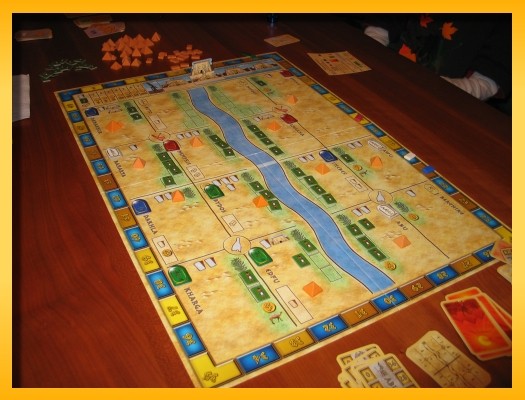 At a minimum, I’ve found my most photogenic game. At my maximum, I’ve found another great “Knizia” game. The kids and I decided to sit down this afternoon and work through a sample playing of Amun-Re but this time we got Lisa involved. Lisa likes to play games but she really doesn’t like to participate in the game learning process. She’d much rather be taught the game quickly by someone who already knows the rules. She learns very quickly if you can answer her rapid-fire questions but gets a little frustrated if the answers are along the lines of, “I don’t know. I’ll bet we’ll find that out later”. However, she was a real sport and we all worked through the 12 pages of rules that accompany the game. Somewhat strangely, my 9 year old son beat all of us and to Lisa’s surprise he beat her by just a couple of points. I can tell she’s still trying to figure out what happened. To be fair though, we only played through the Old Kingdom but scored the gold as if we were at the end of the New Kingdom. 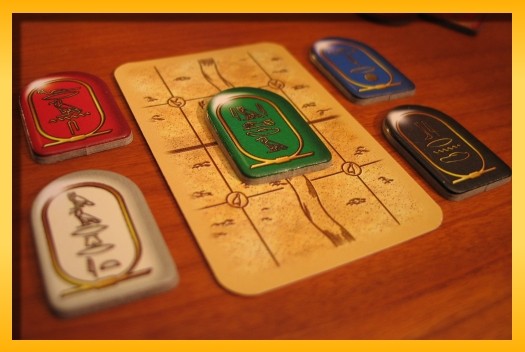 (Province markers on the back of a Province Card)

Amun-Re is played in Ancient Egypt during the reigns of pharaohs. Players represent rivals who control provinces in which to build pyramids. Players vie for control of a new province every round so by the end of the Old Kingdom each player controls three provinces. At the end of the Old Kingdom, all players relinquish control of their provinces but the pyramids they built remain. In the new Kingdom, players vie again for control of the same set of provinces and the player with the most points wins.

(Farmers and Pyramids in the market)

In the five phases (six phases if the round is a scoring round) of the round, players bid gold for control of provinces that are up for auction until each player has won a bid. Power cards can be played to thwart the attacks of rivals in outmaneuvering you for control of a province. Once the provinces have been won, players take their actions in the order of: purchase power cards, purchase and place farmers in your provinces, and purchase and place building blocks (and potentially forming pyramids – three blocks/pyramid). As in other phases, some Power Cards can be played to help the player accomplish something extra (e.g. building a pyramid with only two blocks instead of three). A price chart on the board enumerates the prices for the items. The prices are not graduated like in Power Grid but instead, each individual good costs the same amount but the amount is determined by how many you purchase at one time. The more you buy, the more expensive each item is. To make matters more complex, each province support a maximum number farmers and the provinces you control dictate the maximum number of power cards you are allowed to purchase.

After taking your actions, each player must make a sacrifice to the god of Amun-Re. All players submit cards to an offering pot and everyone turns over their cards simultaneously. The sum of the cards dictates the total value of the sacrifice (the cards are the same cards you use to purchase goods during the action phase and the cards are lost during the sacrifice). The level of the sacrifice dictates the position of the Amun-Re temple on the temple track. The player that sacrificed the most gold gets to choose three goods in any desired combination (power card, farmer, building block). The second highest gets two goods and everyone else gets a single good free of charge. It is possible to sacrifice a negative amount (-3) but Amun-Re doesn’t like that you’ve taken three gold coins from the bank so you don’t get any free goods.

After the goods have been distributed, Amun-Re blesses the river to the degree indicated by the temple on the temple track and players score their position in their provinces by receiving gold for farmer’s harvests and any additional future harvests that their particular province brings. Again, Power Cards can be played to increase or otherwise modify the amount of your harvest. After this phase, the round is over (or you go on to score your position if the Kingdom is complete). 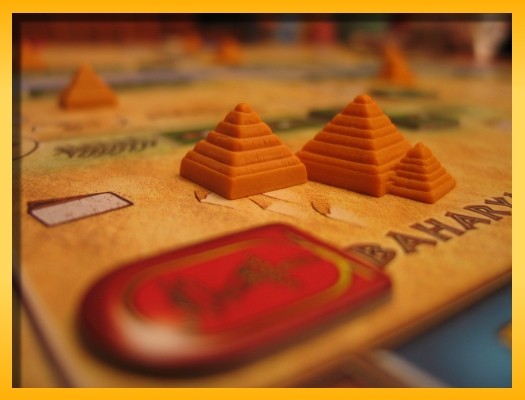 When scoring, the provinces you control, number of pyramids and their relative placement in your provinces, the location of your provinces on the map, and the playing of Power Cards are work together to earn you points on the scoring track. After the second and final scoring, the amount of cash left in each player’s hand also contributes to the final scoring.

Amun-Re is a complex game and in league with Power Grid. Like most Knizia games, there are many brain burner decisions to be made and at some points it’s just too hard to keep it in your head at once and you have to just give up and play by get feel rather than playing against some mathematical model in your head. Controlling and/or otherwise modifying the level of the Amun-Re sacrifice seems almost crucial to swaying the game but the amount of energy it takes to determine who benefits from a higher or lower level of sacrifice seems almost mind-boggling. I enjoyed playing the game a lot and really look forward to some more plays.