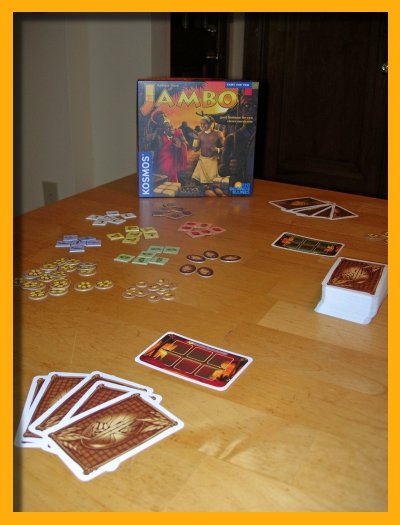 Jambo arrived along with another game I won’t mention just quite yet. I bought Jambo mainly for Lisa and I to play. She really likes the 2-player variant of San Juan so I thought this one might be up her alley as well. I haven’t even read the rules yet but purchased it mainly from the good reviews and comments I’ve read on BGG.

Players take on the role of merchants offering their wares from market stands.

On a player’s turn, he has five actions to choose from. Actions can be used to draw cards, play cards and activate buildup cards.

In order to sell wares, the merchants must first lay the wares out, since customers will only buy where all the wares they want are being offered. And since market space is at a premium, players have to think hard about which wares to offer.

By owning important buildup cards and properly using the assets of other village inhabitants, the merchants succeed in attracting especially many customers to their stalls, making bargain buys, and messing with their opponents’ plans.

The first player to reach a set cash level through buying and selling of wares is the winner.