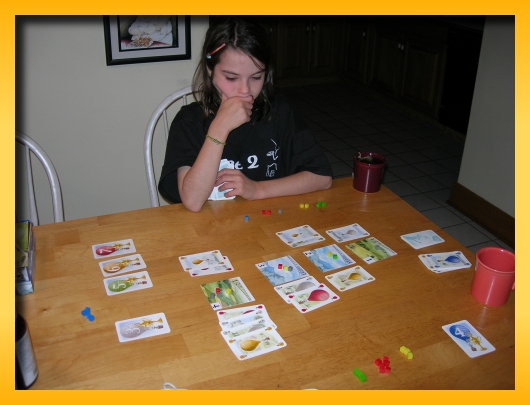 Sophie and I played Balloon Cup tonight while Noah watched Empire Strikes Back for the 40-eleventh time.

Oh Acquire. How many ways can we play thee wrong? Let me count the ways.

Anyway-eth, Ken won this fiasco. It had been at least a year or two since we played this and we played with the rules from memory. By the time the first merge occurred, there were only a couple places for any hotel to come back onto the board. Given that we were only buying two shares of stock at a time, many of us had money well into the game and were in no big hurry to force a merge to get cash. I think we should record this month in the AGN game night annals as a huge mulligan. I mean Ken won for gosh sakes… However Keith did lose keeping his streak alive of never winning the game.

Thanks Keith for hosting. Tim Degitz came back so we didn’t haze him too badly last time. Randy Kauffman showed up for the first time in a long time and we were very glad to see him back.

The next game night falls on Labor Day so we’ll probably postpone until 09/12/05.