I played my Origins 2005 purchase of Alhambra for the first time during my monthly game night (AGN) and recently taught it to Noah, Sophie, and Lisa. Both times, the wall scoring seemed way too powerful. The rules were very vague and so I did some digging on the BGG.Wouldn’t you know it, we’ve been playing it wrong.

That’s a horse of a different color! 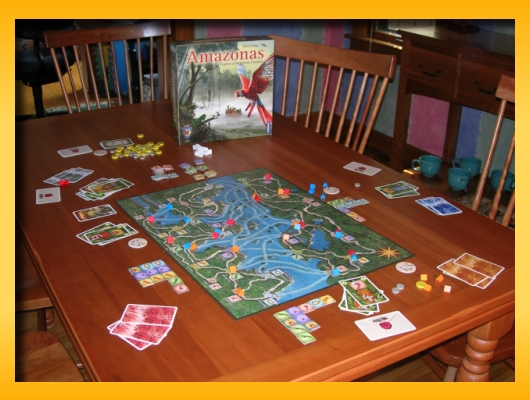 The July 2005 edition of game night took place last night at my house. We had 7 so we had the rare opportunity to have two tables running. We started earlier than usual. Thanks Gus for picking up the pizza…I still need to pay you back so don’t let me forget.

We managed to get in games of Alhambra, Balloon Cup, Clans, and Amazonas.

Keith blew away the field in Alhambra but he’s got to chalk that up to beginners luck since this was the first time anyone has played. Tim beat Ken at Balloon Cup having never played it before; way to go Tim! I heard Rich won at Clans but I wasn’t at that table so that could be just a rumor. Tim won again at Amazonas….beginners luck, I’m sure. Ken will back me up on that, right Ken?…Ken?

Thanks guys for coming, I had a good time.

In Amazonas, there is apparently a language translation error in the English form. After purchasing a native token you must declare the specimen type that the token represents. However, the token must be declared to be of a type of specimen that you already possess. In other words, you cannot take a native token for the sole purpose of helping you obtain the 5-specimen bonus. 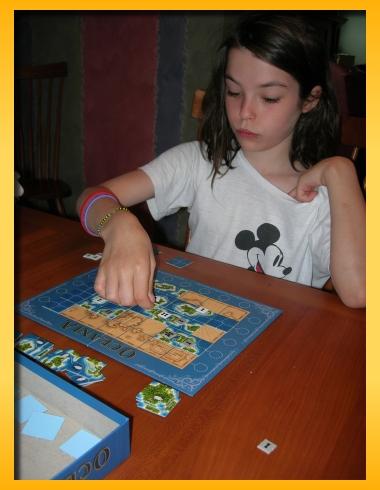 I taught Sophie Oceania this morning. Sophie really liked the game and compared it to a cross between Carcassonne and Metro.

Do you think my kids are going to be gamers?