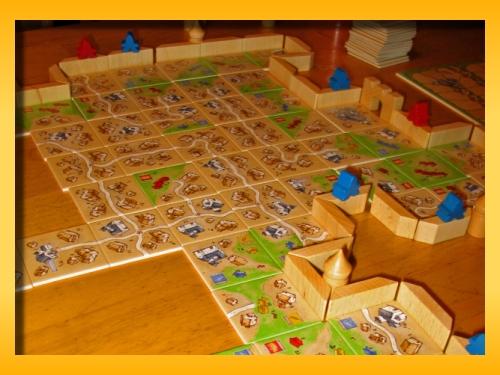 Noah and I finally got around to playing the ‘City’ variant to Carcassonne that I bought a while ago. I’ve always liked the original version but this one is much better. A lot more strategic options to deal with. It might be that Noah beat me by 21 points after playing a partial game that has me a little irked though…

This month’s game was Keith’s copy of Kill Doctor Lucky from the venerable Cheap Ass Games . We tracked down some colored poker chips to act as our pawns (CheapAss games sometimes require you to borrow common parts from other games….’cause, well, they’re cheap asses).

The game requires you to move your pawn around a set of rooms on the assembled paper “board” either drawing or playing cards, and/or attempting to murder the ever moving Dr. Lucky. Your attempts to kill Dr. Lucky with your weapon cards (our favorite was Ken’s massive blow with the “Monkey Paw”) can be thwarted by other players tossing out “Failure” cards.

We all felt that the game’s feel didn’t change too much during play and it stagnated while we ran through the Failure Cards until somebody messed up letting an attacker win.

It probably deserves another play using some of the proposed variants described in the author’s “commentary” track in the rules. Keith seemed especially keen on the “kill other players” variant. I can’t say why but I felt a little concerned for his soul…

We then played three rounds of 6-Nimmt, a good filler game to close out the night early. Thanks go to Paul for hosting and I hope Ken didn’t keep anyone up too far past their bedtime.